Now, I debated on whether or not to write about this palace… you aren’t allowed to take pictures inside.  So is it worth it to write about it?  Or just skip this and move onto the next thing?  But ultimately, I really enjoyed it- and wanted to share it.

We got to the palace, and had to wait for a bit to get in.  It was very busy- but they regulate how many people can enter at a time.  It was also raining- which meant that everyone was standing in the ticket hall/gift shop area and it was very much like a zoo.

We decided buy a ticket for the biggest tour in the castle, but not for any of the other attractions on the castle grounds.  On a nicer day, I think it would be fun to do the full pass and spend the day wandering around- but with the nasty weather, the bit of walking around that we did do seemed like more than enough. 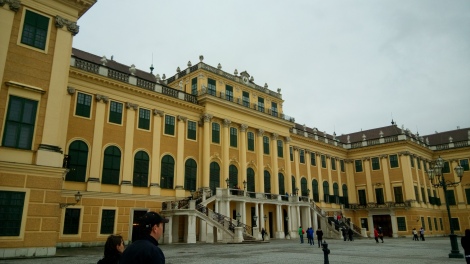 Walking up the palace- it’s quite grand.  Very large.  And the thought of walking around it is quite tiring.  Luckily (unluckily?) you don’t actually get to walk around most of it.  We chose to do the longer of the two tour options, but even that saw just a small fraction of the inside.

Whenever I’m walking around these large palaces it really makes me think about what living would have been like there.  Especially considering that this palace was built as a hunting lodge, and served as a summer palace.  I mean really.  I think I would get lost.  Regularly. 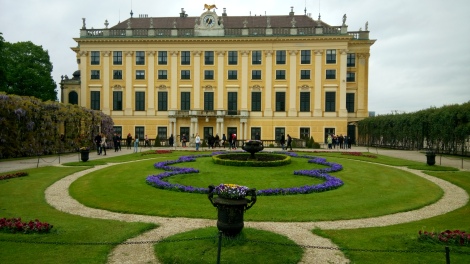 That’s just a side view!

As I said I don’t really have any photos of the inside of the palace- because they wouldn’t let anyone take photos.  However.  I have a lot of information- because they did give me an audio guide!

One thing that I was really surprised about was how many people had actually stayed there, and how much of a role it had had in European history.  This was the palace of the Habsburgs, and the seat of power of the Austro-Hungarian Empire.  Marie Antoinette was raised there.  Napoleon stayed there when he occupied Vienna.  Lots of history.

And whatever was going on here…

But obviously- the love story was what captivated me.  Audio-guide-voice-lady spoke for a long time about Franz Joseph’s love for his wife Elizabeth.  She told us about how besotted he was with her, and how he never recovered from her death.  She told us about him saying, ‘No one will ever know how important she was to me.’

And she told us about what an odd duck Elizabeth was.  She told us that Elizabeth refused to eat dinner with the family.  That she wrote in her journal about married life being awful.  She was cold and distant.   She was portrayed as vain, and known only for her perfect figure, floor length hair and perfect of the moment fashion.

What audio-guide-voice-lady didn’t tell us about Elizabeth was that Franz Joseph was supposed to marry her sister, but chose her instead after falling in love.  This angered his family, and Elizabeth was treated horribly by them, especially his mother.  Her first two children were taken away from her- she wasn’t allowed to name them or nurse them.  She had always been an introverted person, but moving to the court life of the Habsburgs created anxiety disorders, probable eating disorders and depression.

Her inability to produce a male heir was harped upon by the people of Austria and especially by her mother in law.  And when she finally did have a son, she once again clashed with her husband and mother in law on how he should be raised.  At the age of thirty her son killed his lover and himself.  This came in a five year period in which she lost her only son, her father, her mother, her sister, and her best friend (and possible lover.)

End result- I left Schonnbrun disliking Elizabeth, but a little more research shows she might be a little more sympathetic than she was made out to be by audio-guide-voice-lady.

One of the highlights of Elizabeth’s time at the palace was that her husband built beautiful gardens for her to remind her of her childhood in Bavaria.

It was pretty cold and wet so we didn’t get to walk around most of the grounds, but even just the bit that we saw was really beautiful.

We were there a bit too early in the season to see lots of flowers, but the arch covered with wisteria was beautiful! 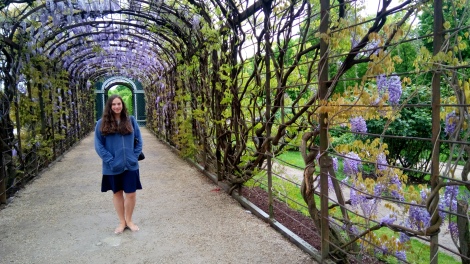 Tree trimmers definitely have their work cut out for them here. 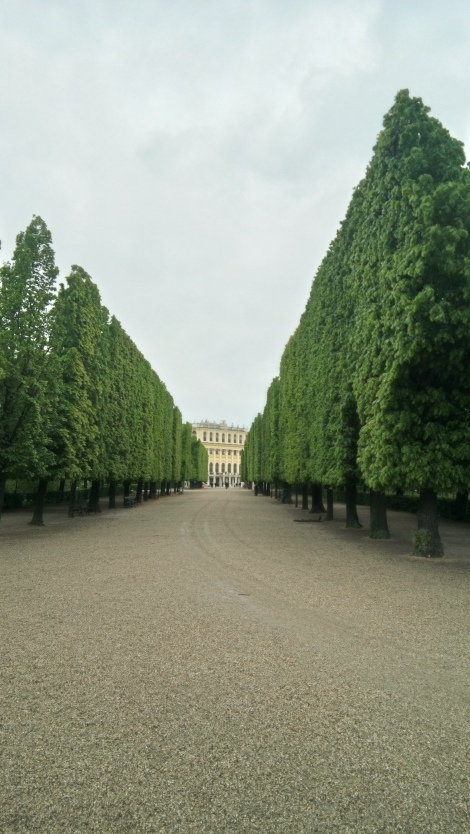 And there was even a spectacular greenhouse.

All in all a really fun way to spend a cold and dreary day.  Note to palace goers- when you get your scheduled entry time, wait a few minutes to really start your journey.  That way you’re not in the main flood of people, and don’t have to deal with trying to see around people or getting jostled the whole time.