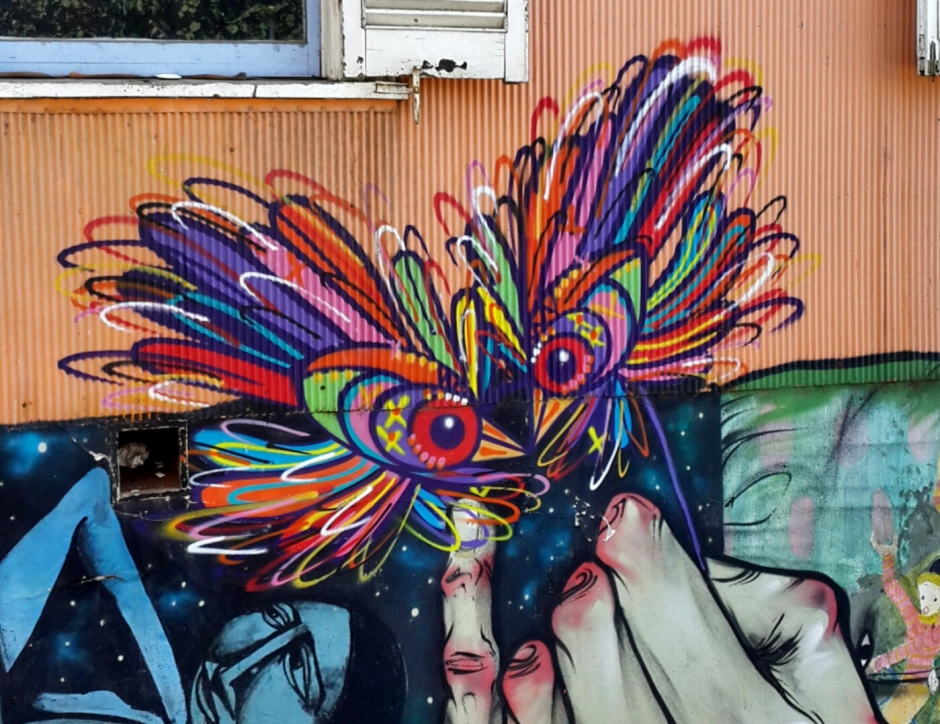 Though Berlin will always hold a special place in my street art loving heart, Valparaiso is coming pretty close.  I’ve really been enjoying walking around and seeing all the beautiful artwork in the city. END_OF_DOCUMENT_TOKEN_TO_BE_REPLACED

I have wanted to go to Heyri Art Village for quite a while now.  I originally found it while looking at places to go during winter break last year.  It’s a really interesting village that is basically a space for different artists.  It’s jammed packed with museums, gallerys, cafes and sculptures. For a number of reasons, the trip kept getting postponed, and pushed back, and delayed, until finally I said enough is enough, hopped on the subway and went up north.  I’m so happy I finally went, especially since I was starting to think I never would.

First, getting to Heyri is super easy.  Which is a dream for me, because directions are not my favorite thing.  It’s in the northern part of South Korea, near Paju and only a few kilometers from the North Korean border.  As someone that has not been up to visit the DMZ (and has no intention to go at this time) this was probably the closest I would come to North Korea.  The only weird thing about it was the highway.  On the drive up to Heyri, the highway is lined on one side with barbed wire, and it has frequent guard stations spaced along it.  This highway runs along a river that makes up part of the border. 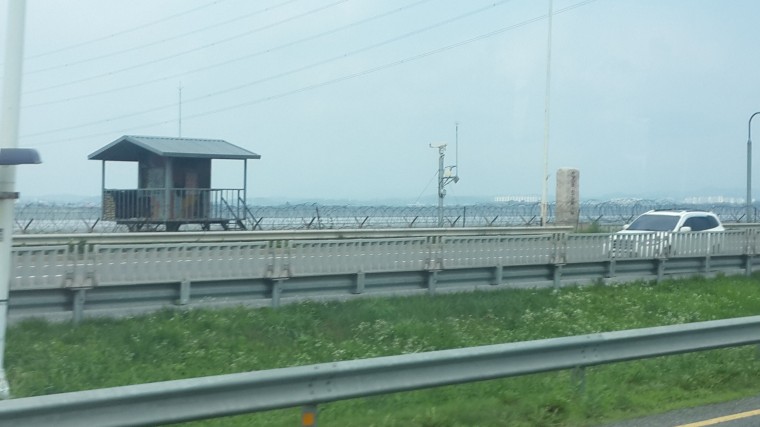 Getting closer to Heyri, the excitement started to build.  The buildings were noticeably more interesting.  I saw repurposed shipping containers, old busses, and lots and lots of color.

Gripe number one about Heyri.  (and there will only be one, so don’t be expecting a list, this place is wonderful.) There is very very little in terms of information.  No guide map that you can walk around with, and though there are some map signs posted around the village- they don’t have ‘you are here’ arrows, which makes them useless to me.  So I did a lot of wandering, which was lovely.  But it was hot.  “How hot?” you ask? So hot the dog didn’t want to move: 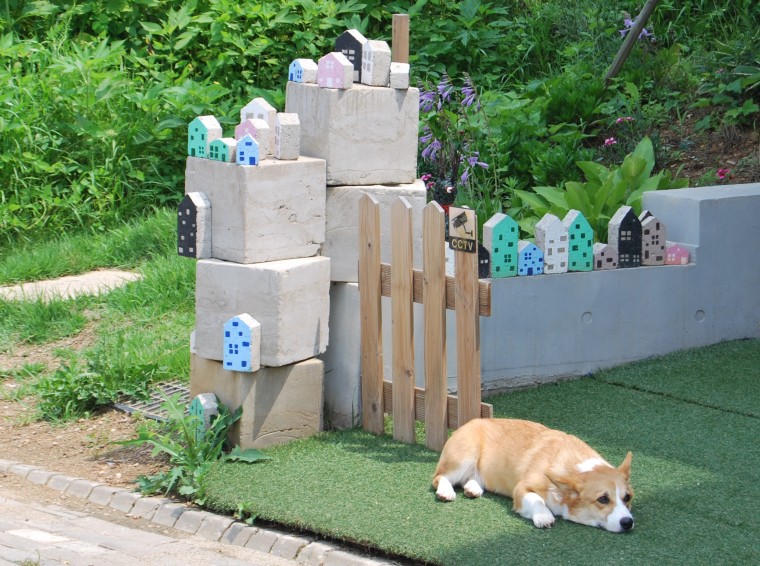 Now, one gripe I have with the Korean Tourism Heyri site.  They say that most everything is closed on Mondays, which is handy information.  A bit handier would be to say that most galleries are closed Monday and Tuesdays.  I went on a Tuesday, and while most of the museums and cafes were open, most of the galleries were not.  On the upside here, because there is little to no information about what to actually see there, there was nothing I was too excited about beforehand.  Mostly it was just a big unknown.  And while it would have been nice to know about the possibly closed galleries in advance, I was planning more with the weather than anything else.  It’s been a rainy monsoon season here the last few week… so I was basically going on the only day with sun.  (Even though it was so hot.)

Now,  Many fun things to see and do in Heyri.  I imagine it’s the kind of place that becomes more interesting the more time you spend there.  But first: lunch.

Most of the cafes seemed to be pricey for what they were offering.  I ended up choosing Eataly.  Mostly because it was there, and I was hot and lost, and the closed windows made me think they had air conditioning.  They did, and it was glorious.  They also had a free brunch buffet if you ordered food.  So I ordered, and thought the brunch buffet would be toast, or maybe some type of sandwich or omelet.  I suppose I have just gotten too used to free hostel breakfast.  But I was in for a surprise. 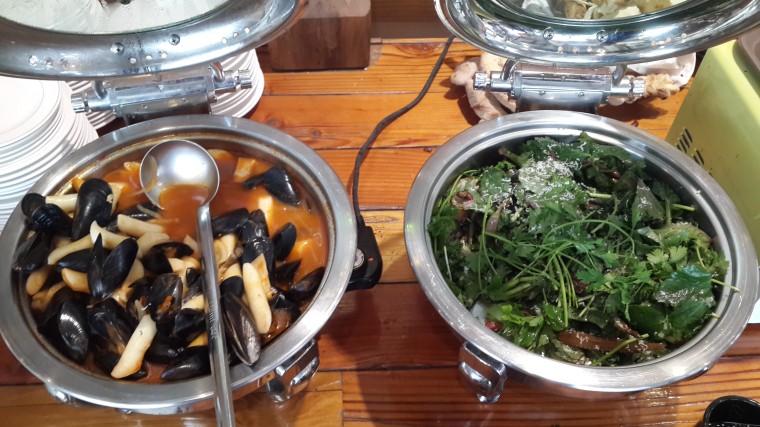 The free brunch buffet was seafood tteokbokki, and salad that was actually delicious, chips and assorted dips, and little mini semi deconstructed lasagnas.

I also got a black olive and rucola pizza that was huge.  But it was SO GOOD.  And since it was so big, I ended up taking half of it home with me and eating it for dinner. 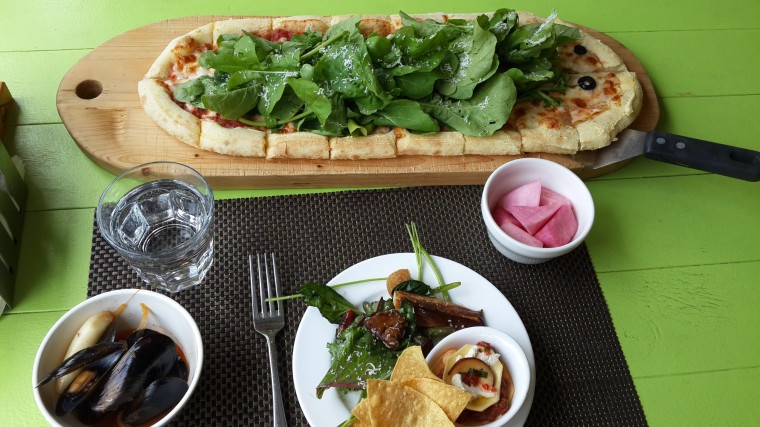 Eataly also offers the brunch buffet for 5,000 won if you just order a drink.  If you’re not very hungry, I think that would be totally worth it.  Even if you’re pretty hungry, it would be worth it.  But the pizza was delicious, so I would suggest getting one of those as well. 🙂

After lunch, I headed out once again.  I was excited to head to the video game museum.  I was reading Ready Player One on the bus ride up to Heyri, so I felt like I had to go and at least check it out.  It was really fun.  They had so many games set up to play.  I beat a little kid in Mario Kart several times.  But mostly I just hung out and played Super Mario Brothers and Tetris.  Because I’m so hip.  Also had my first experience with a 4D game… NOT A FAN.  It was a 3D first person shooter game, and it would puff air at you to simulate bullets whizzing by your head.  NOPE.

After the video game museum, I walked around quite a bit.  Saw some really cool statues: 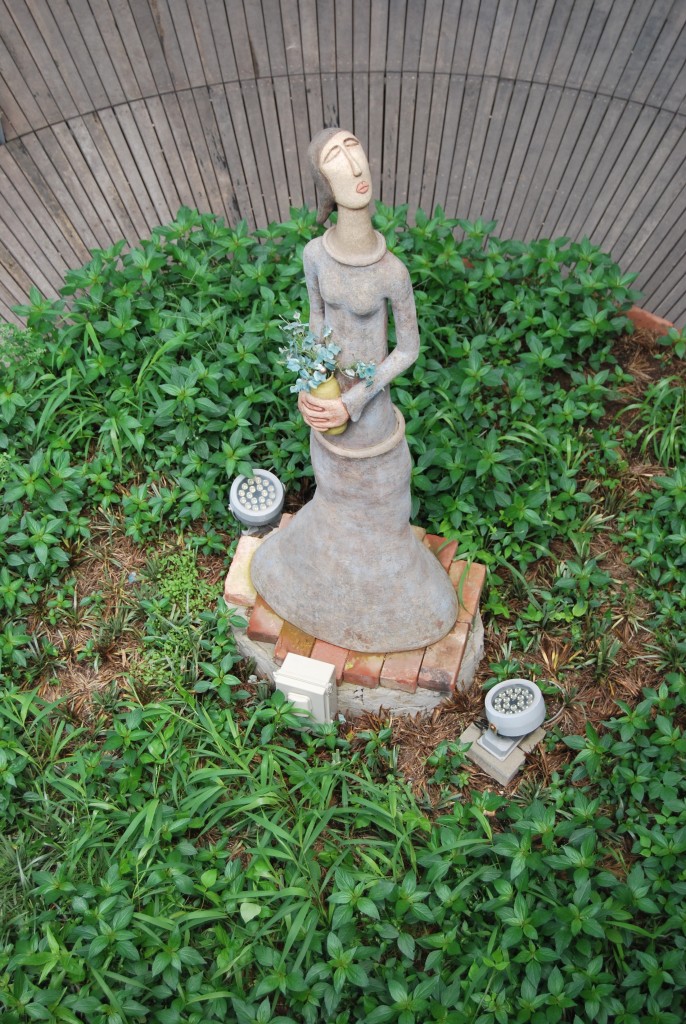 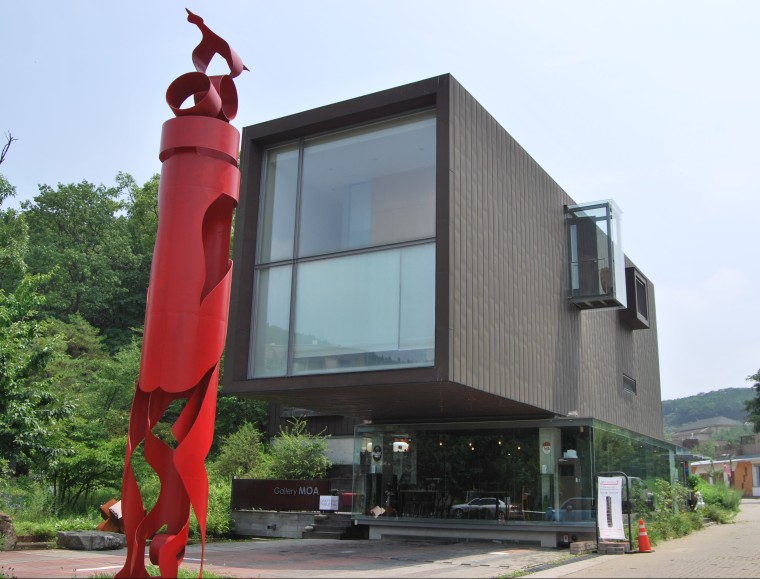 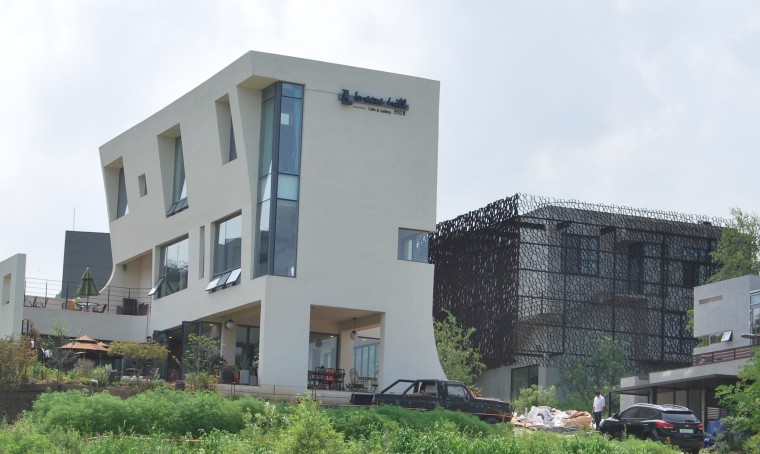 And tons of re-purposed vehicles, shipping containers, and odds and ends: 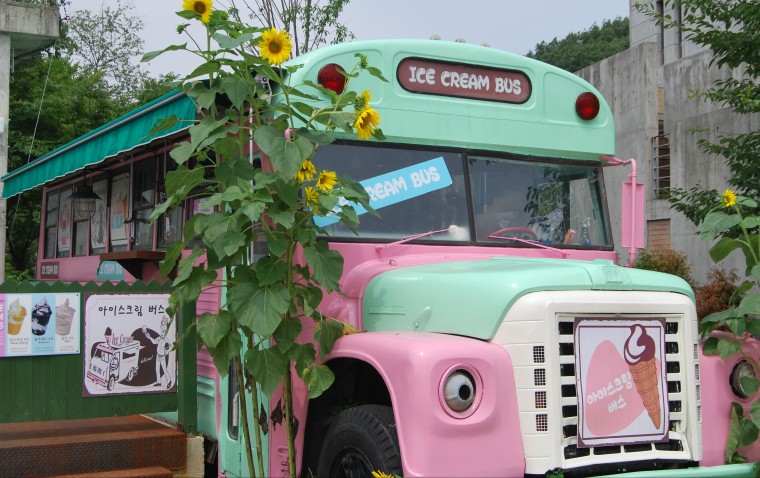 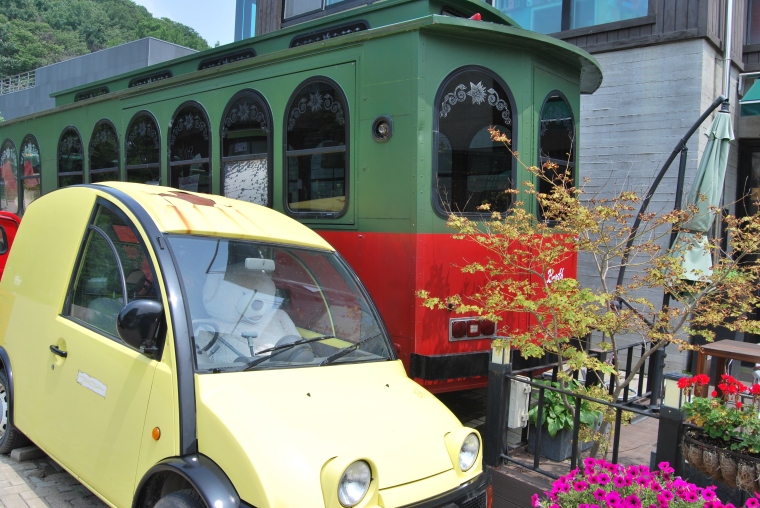 We want an ice cream shop, but all we have is an old foreign school bus… PERFECT!  And I have this pile of broken bricks… make a village!  Something tells me that bear does not have a drivers license, though.

And overall just a ton of cool little artistic touches that made the whole place feel rather wonderful… like this dog/cat condo: 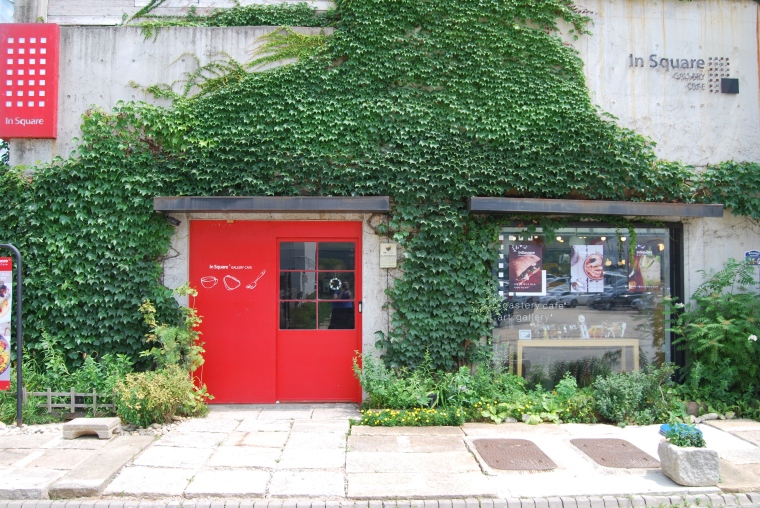 All in all, I would definitely suggest a trip up to Heyri to anyone living in Korea.  It was fun, easy to get to, and really distinct.  You won’t get an experience like it anywhere else.  Also, on the way to Heyri, you pass the Paju Outlets, which are HUGE and probably worth going to as well.

I’m going to include some directions here, in case anyone is planning on taking the trip, because the ones on the Korean Tourism website aren’t perfect.
Take subway Line 2 to Hapjeong Station, and then take Exit 1.  (The website says exit 2, but no.)
– Take Bus 2200.  It is just outside Exit 1, there is a big red circle sign. (And when I went- a line of people waiting for the bus to come.  It comes every 15 minutes.
– Get off at the Heyri stop. (It takes 40-50 minutes, and things will start looking more ‘artsy’ well before you reach Heyri Art Village.  Wait until she says “Heyri!”)

Then just have fun!  I have to note- easily my favorite place that I visited was the toy museum… I will be writing a separate blog about that (because this one is very long already) But here is one picture to pique your interest: