Costa Rica has been at the top of my list of places I wanted to go for so long, it had become almost mythical in my mind.  This amazing place where beaches were lined by jungle.  Monkeys hung out and were friendly.  All the adventure you could want, which for me was a hammock on the beach.

Even though I enjoyed my first two stops in Costa Rica, it hadn’t really lived up to my ideal.  Manuel Antonio was visually my perfect image of the beach and jungle… but for some reason, it didn’t quite fit.

Until I got to Dominical.

I stayed at a wonderful hostel, right on the beach.  I can’t say enough about Cool Vibes.  But I can say that when I got off the bus in town, there were two backpackers getting on.  When I told them I was staying at Cool Vibes, they seemed genuinely happy for me. They had just left, they said, and assured me that I was going to love it, and that it did in fact have Cool Vibes.

Dominical was listed in a blurb in my travel guide as a place for people that want to split their time between a surfboard and a hammock.  Sounded good to me.  Much to the chagrin of my hostel mates, I didn’t try surfing.  But splitting my time between hammock and beach, watching the surfers… that sounded good to me. 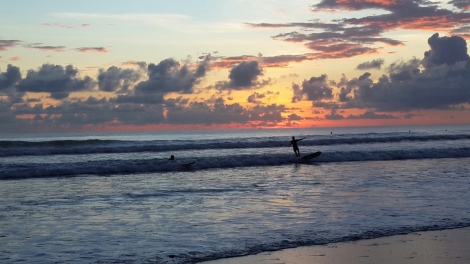 But really, Dominical had a lot more going on that it was given credit for.  Great restaurants, a really friendly community, a beautiful waterfall (so I’ve been told)… it was just a great place.

I spent most of my afternoons (and some of my mornings as well) at Cafe Mono Congo, near the top of the road as you’re coming into town.  (Town is roughly one road)

The fact that meat eater me, spent everyday at a vegetarian cafe, and didn’t even miss meat, says something about how good the food is at the cafe.  Not to mention the baked goods. Chocolate papaya tart, coconut cheesecake, and (I reckon) the best cinnamon rolls in Costa Rica.

The kicker was, everyone was unbelievably nice, and friendly.  A lot of expats worked there,  and it seemed like a place where everyone just loved it so much, they stayed- and they wanted you to love it that much too.

Didn’t hurt that it had a lovely view of the river and beach, and live music many nights.

Now, I did have a bit of an issue with watching the sunset.  Mother nature seemed determined to hide it from me.  Every time I was waiting on the beach to see it, it got cloudy right before sunset.  But the days I was lazing in a hammock in the hostel common room, I could see the brilliant sunset through the open front of the hostel. So on my last night, we all waited until juuuust before sunset, and then headed out to the beach.  So worth it.

A note about the aforementioned waterfall. There are two waterfalls near Dominical. One is only about 5 minutes away. So we went to see it, but definitely went the wrong way, and went 45 minutes into the jungle, up a mountain, in 90° heat with 100% humidity. We never found the waterfall. We did see this cool hanging flower thing (that is apparently a banana tree?): 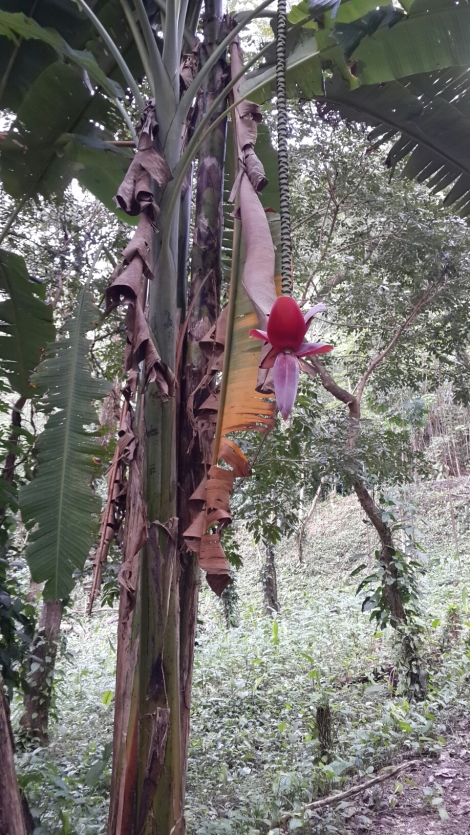 But no waterfall. Everyone else went back the next day, and found it within the 5 minutes. And said it was beautiful. But I had had enough of trekking for my life the day… so I looked at their pictures while swaying in the hammock. Good enough.

One of my favorite places was a small river/stream that ran into the ocean. It made a lovely little swimming area, and because the water was from up the mountain, it was cold. Which was a refreshing change from the bathwater like ocean water. 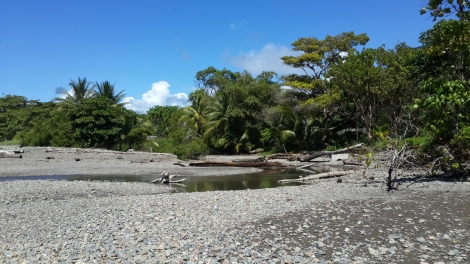 So, that was my life for what was supposed to be 2 days, and turned into nearly 2 weeks. (At least it wasn’t two years… way to go self control)
One more post about Costa Rica in the works… and then on to Peru!