I was staying in a phenomenal hostel in Domincal, Costa Rica.  The hostel is right on the beach, super laid back… and all open air.  It feels a little like camping, but with way nicer amenities than a tent.

One of my favorite things is the fact that it is open air, and the roof is really high, with wooden beams under the metal roof.  For one thing, the rain (and it rains everyday- they aren’t joking about the rainy season) sounds awesome on the roof.  Also, because it’s all open you can hear the ocean waves while you’re laying in bed. Or while laying in a hammock in the common area.
Now, another interesting side effect of being all open is that there isn’t really anything keeping the wildlife out.
And here that means lizards.
The lizards come in all shapes and sizes, and they generally keep to themselves. I’m afraid of just about everything that moves, but these guys never scared me. They did however, sometimes scare each other. First, I’ll introduce the three lizards that I named.
This is Jake*: 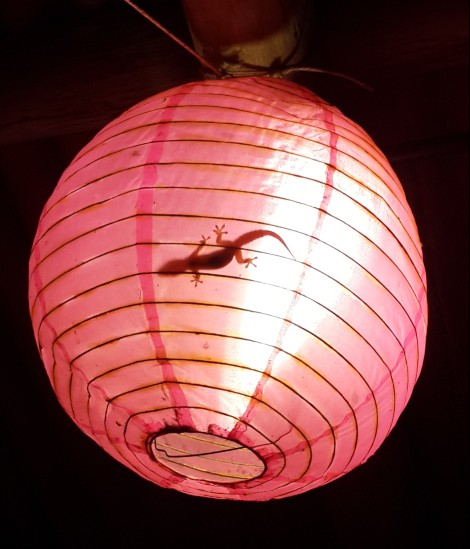 Jake liked to hang out in our light. You couldn’t see him when the light was off, but when you turned it on, all of a sudden, there he was.
This is Steve:

Steve actually stayed outside the hostel, but he liked to chill on the net right next to my bed. We got along, all things considered, though he wasn’t much of a conversationalist.
This is Frank: 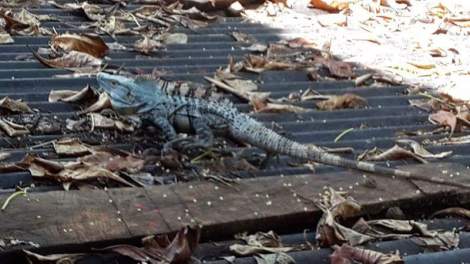 So, Steve was probably my favorite of the iguanas. He wasn’t that big, maybe only about 2 feet, (and most of that was tail.)
And then one day, all of a sudden- and out of nowhere, Frank comes running across the roof beams, down the wall and attacked Steve. Steve fell down to the roof below, and Frank kept after him, until eventually, Steve fell off the roof.
This all led me to do a little iguana research. Turns out that iguanas are generally pretty nice, and make decent pets (?) but that males can be territorial and agressive if another male enters their space.
Well, Frank decided the hostel was his territory, even though it was PLENTY big enough for us all. And he started attacking any other iguanas that came in.

Frank stalking another iguana across the roof beam.

As a fellow backpacker coined it: iguana drama.
Now, the iguana drama never really affected us, other than a general fear that one of them would fall on you. None did though, at least not while I was there. But the loud scratchy sounds of their claws on the metal roof was enough to draw your attention.
I tried to get a good picture of iguanas fighting, but they actually move really fast, so a lot of the pictures are just grey blurs. Take my word for it though. They were fighting.

Some of the little lizards were really friendly… such as this little guy that hopped onto a backpacker and then just chilled and posed for pictures:

And some of them were a bit too friendly.  I was sitting on a chair in the common area texting with a friend when I heard a scratchy sound just next to my head.  I turned to look, and saw these two: 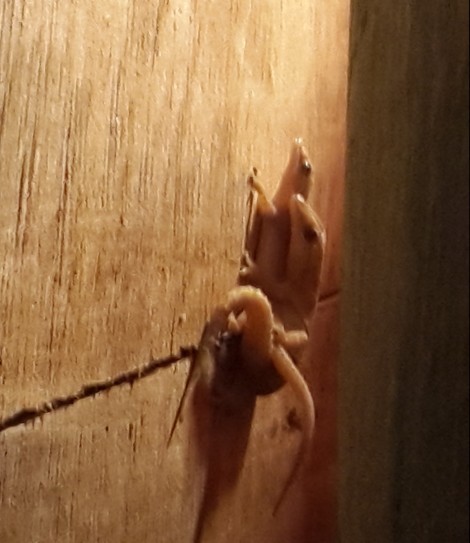 We made eye contact and all of us froze.  I didn’t know what to do.  Should I leave and give them a few minutes of privacy?  Don’t they know that the common room of a hostel is NOT the appropriate place? I went to the kitchen to get a drink of water, and they were gone when I got back.

So, that was my brush with wildlife while staying in Costa Rica.  Now, I’m in Peru where the only wildlife I’m hanging out with are alpacas and llamas.  And one really flappy hawk- but that’s another story.  That’s it for now. I’ll leave you with another picture of Frank, in his favorite place as king of the castle.

*Jake may have been female… but because of the fighting, I’m pretty sure Frank and Steve were male.