I grew up on the East coast of the US, not far from New York. I was raised thinking that New York City was the best city in the US, and subsequently, that the east coast was the place to be.  I would scoff at “west coast- best coast” braggarts, and once had an extra long conversation with an IT technician where he tried to convince me California was the greatest place to live while the computer system was rebooting. I did not believe him.  But now that I have actually been to California (and only a small bit of it) I might actually lean that way a little.

Before this most recent trip, I had only been to the west coast once.  A magical trip to Seattle to see my favorite band in concert.  It was a phenomenal trip, but one that I thought was a complete oddity.  Turns out, magical moments happen all up and down that coast.

Mumford & Sons announced a west coast USA tour at about the same time I was starting to plan my summer trip to the states.  All of the timings worked out suspiciously well, and it seemed like a trip to the west coast was going to be a big part of my trip home.  I have family in LA, so I called ’em up, and headed over.

I started the trip off in LA.  Long derided by everyone I knew from New York, I wasn’t expecting much.  LAX airport lived up to that expectation.  The uber drive took 45 minutes. 25 to get out of the airport, and 20 to get across town.  “Traffic, yikes…” would become the running theme of the week.  But having just come from NYC, where the subway was never running correctly or on time, at least I was in a car and not cramped, standing on a subway train.  I was pleasantly shocked by the weather.  Warm and sunny, but not humid and not oppressive.  It was lovely.  Great food, great weather, great people… LA really shocked me.

Because it was my birthday, and it’s important to have traditions, the trip started out with a pancakes.  And they were carrot cake pancakes, which means they had vegetables in them, and were therefore healthy. (this is pretty much the only healthy thing I will eat on this trip.)

I was only in LA for two days, and all of the second was spent at the phenomenal Mumford & Sons show at Banc of America stadium. It was fantastic, and they opened with my favorite song, (to date- the only time I’ve heard it live.) But then it was time to hop on another plane and head up to Portland, Oregon.

I didn’t really know what to expect from Portland. I knew it was sort of a more hipster-y version of Seattle, and well- I wasn’t wrong. But the trip starts out at the airport.  If LAX was probably my least favorite airport I’ve ever, the airport in Portland was almost the exact opposite. Full of loads of local shops and restaurants, it also housed a small movie theater showing short films from local film makers.  What a great way to spend time waiting for a plane!

I stayed at an airbnb in a lovely neighborhood between the airport and downtown.  I instantly loved it, and looked up how expensive it would be to live there… let’s just say I’m not going to be moving to Portland any time soon. One big upside of Portland (for me) is the general love of mac and cheese.  Every place I went to had at least one version of mac and cheese on the menu.  And I know you think I wouldn’t eat the same thing at every restaurant- but you would be wrong.

After another fantastic Mumford show, it was time to head back to LA and actually have time to spend with family and friends.

I got to meet up with a long lost friend and we spent the day in Santa Monica.  Having only ever heard about Santa Monica pier I was really excited to actually be there.  Not only because it’s SUPER FUN and Gorgeous.  But also because some of my favorite Instagram personalities regularly post from there, so we went out to see if they were hanging around- and they were! It felt like meeting celebrities.

After the beach, we headed to Largo Los Angeles, for a very special night.  Sondre Lerche’s favorite night, actually.  He’s been one of my absolute favorite singers since his first album came out, (almost 20 years ago) and the show was an absolute joy.  Helped by the fact that Largo is such a cool venue, and definitely a place I would spend more time at if I lived in the area.  Unfortunately- no photos allowed. 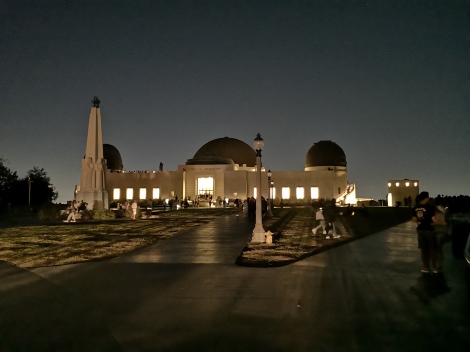 As a well documented space nerd, I was more than a little excited to head up to the Griffith Observatory. Despite the fact that a concert made the traffic an ABSOLUTE nightmare, and we ended up missing out on actually looking through the telescope- it was phenomenal just to be there.  As a film nerd, I thought about how many films have been shot there and it was a bit overwhelming.  I’m going to go back to see the telescope though. 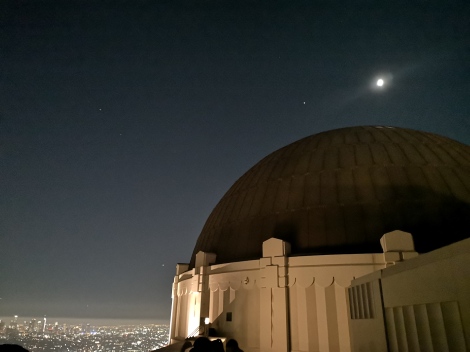 The next day it was time for some cousin bonding time, so this time we headed to Malibu for lunch.

It counts as lunch, because it’s organic.

And what trip to California would be complete without a stay at a super plush resort with the golf courses/pools/shops/cafes to make you feel like a super star?

I don’t golf, but this place kind of made me wish I did.  I even went into the pro shop to look around, and then backed out slowly without touching anything in case they had a “you break it you buy it” policy.  Which would have bankrupted me.

See? California’s not so bad! Not going to lie- as amazing as everything was.  My excitement level was off the charts for…

In-n-out. Long held up as the best burger experience one can have.  A legitimate reason to go to the west coast.  And I wasn’t disappointed.  Despite a long line, service was fast- and everything was as good as expected.  Went for a double double.  Ten out of ten, would go again.

So that was my west coast trip in a nutshell.  Well worth it, and I’m actually sorry it took me so long to get there.  Looking forward to going back next time I am in the states.