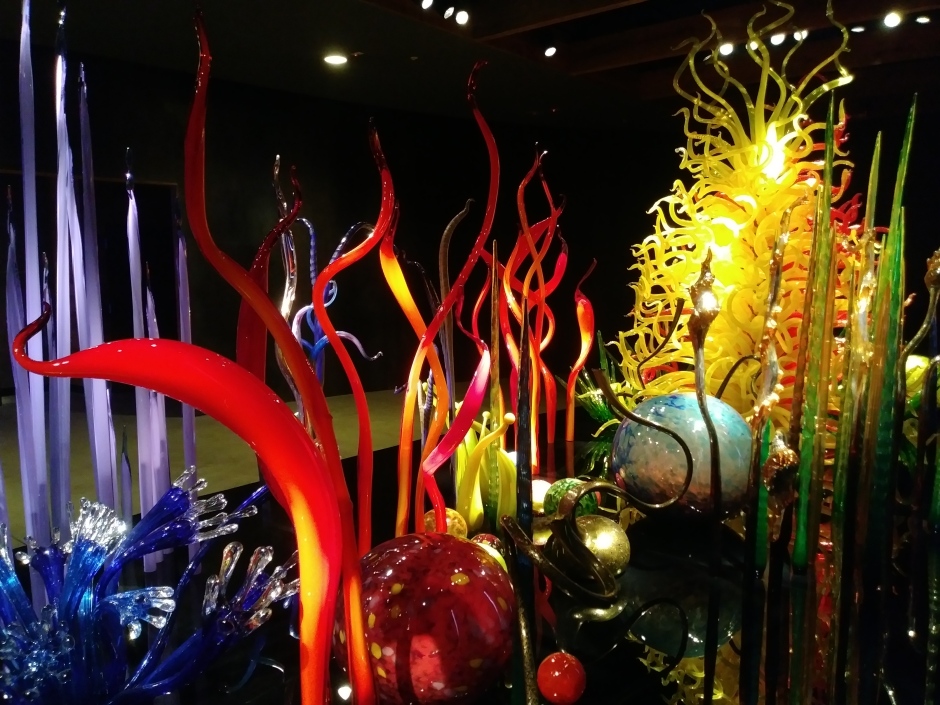 I was pretty excited to learn that there was a Dale Chihuly collection in the Tampa Bay area.  I have always enjoyed his glass work.  I first saw it when Mohegan Sun Casino opened in my state.  His statue there was breathtaking!

Since then, I have always enjoyed his artwork popping up in places I wasn’t expecting.

Such as this piece in the entry way of the Victoria and Albert museum in London.  Which made me stop in my tracks. And proved to be a fitting intro to the museum, as it also pretty much blew my mind.  How they can squeeze so much into a free museum is really shocking.  Anyway- Florida.

So off we went to the Chichuly collection here in St. Petersburgh.  I went in with little idea what it would be like.  Suffice to say, it was fantastic.

The collection, apparently, was a travelling collection that a woman decided she wanted to buy.  She had the building designed specifically for the collection, and brought the whole thing to St. Pete.  Is this story true? Not entirely sure.  But it was told to me by a lady at the exhibit. And she seemed pretty sure.  So maybe.  I like the idea of someone going to see a travelling exhibit, and saying “You know what? Wrap it up! I’ll take it all.” 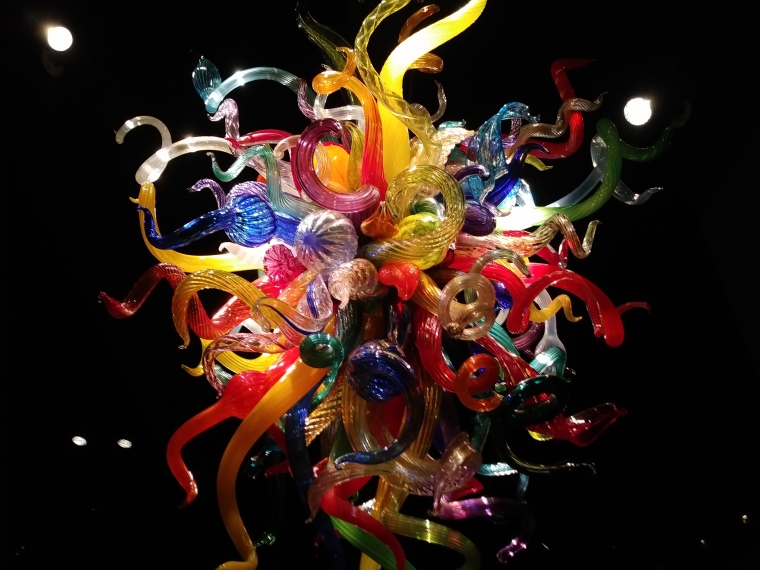 Carnival Chandelier (2008) is the first piece you see when you walk into the exhibit.  Suspended from the ceiling, it is huge and bright and lovely.  The mix of colors are really fun, and though it looks to be glowing, there is no light inside of it, just shining on it.

This was the next piece that I saw.  It also was huge.  I tried to take a picture of it by laying on the ground underneath it, but ultimately, I was too afraid I was going to knock into it and crush myself, and all the pictures came out quite blurry.  This wouldn’t be the only time I laid on the ground in this collection in an attempt to get a good photo.  Little did I know what was hiding around the next corner!

Chihuly is probably most famous for his ceiling in the lobby of the Bellagio hotel in Las Vegas.  I’m sure the Sistine Chapel would have something to say if I claimed it to be the most beautiful ceiling in the world… so, well… I guess make up your own mind.  The Collection in St. Pete had a hallway with the same type of ceiling.  It is said that between 15,000-20,000 people visit the Bellagio lobby everyday, many sitting in the chairs for hours enjoying the spectacular art.  I can understand that feeling as I wanted to lay underneath this ceiling for the rest of the day.  As it is, we walked through several times.  You need to, because along with being beautiful, it is a bit of a treasure hunt as well.  In this piece Chihuly hid many sea creatures.  He also hid one cherub.  What can you find? 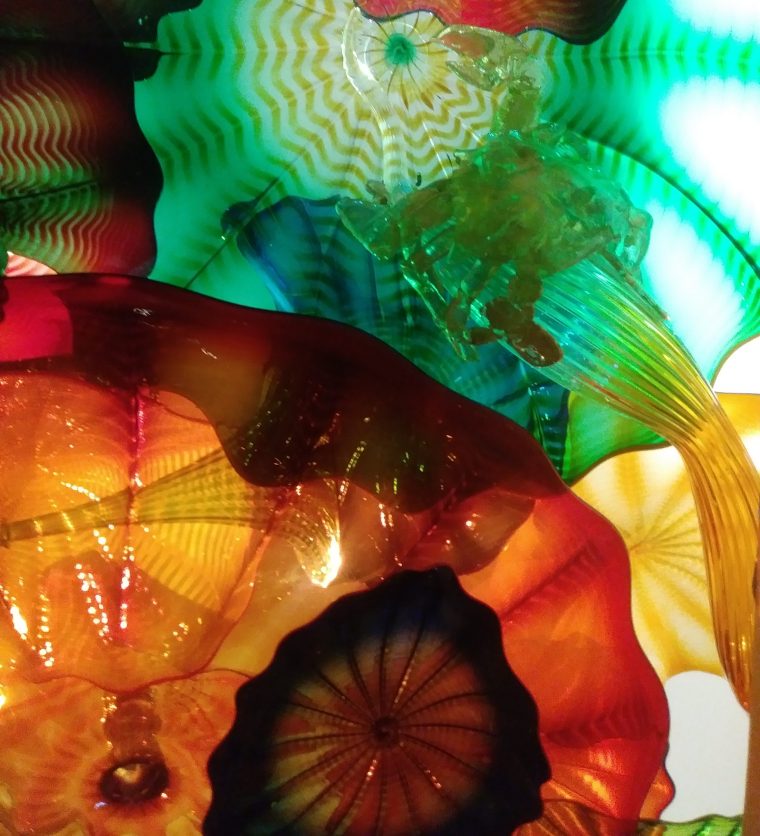 Yes! That’s a crab there in the corner!  And can you find the cherub?

There it is!  After the amazing ceiling in the hallway, we found one room that housed a giant installation that was nearly impossible to photograph.  There was so much going on in this beautiful glass forest.  A riot of color and texture and shape.

But it was very beautiful! Also beautiful was the boat of orbs. Though it looks like a small boat full of marbles, these orbs are not marble sized however.  Large orbs.  Bigger than my head. 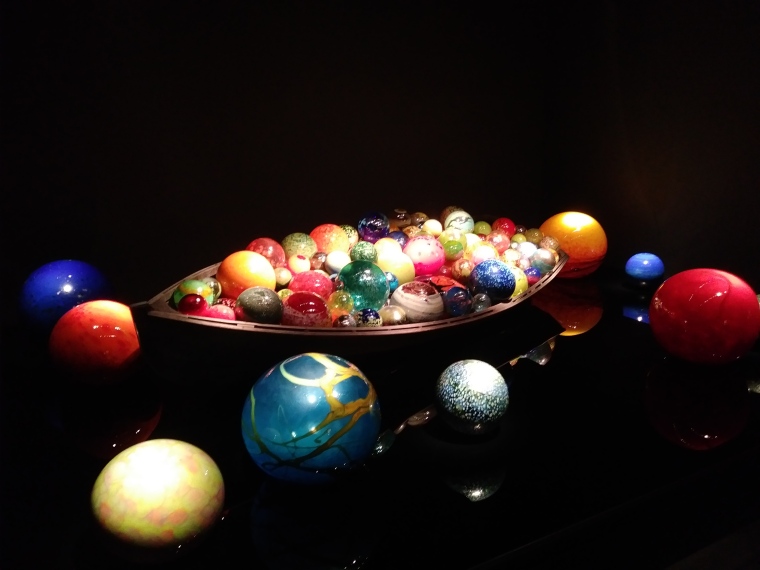 All in all, it was a really great afternoon. I find art very inspiring, and this was a great wake up call.  Also in the exhibit, there was a video of a bit of the process and information about Chihuly and how the glass is all created.  I found it to be very eye opening.  There are so many people that make these pieces possible.  There is so much work that goes into making all of the installations.  And I can not even imagine transporting this much glass anywhere.

In addition to the collection, buying a ticket also gives you an invite to a glass blowing demonstration in the workshop.  Now, I’m not a fan of hot weather… and it was August in Florida.  It was also a glass blowing workshop that is warm even in the dead of winter.  I basically melted, but I still think it was worth going to see, because it is really interesting to see how much work it takes to make each piece of glass. 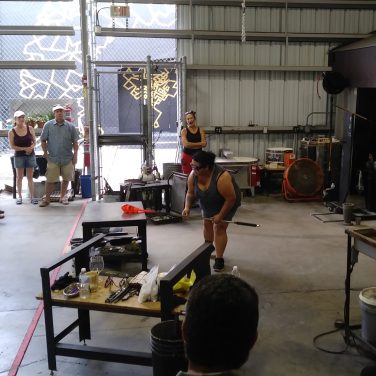 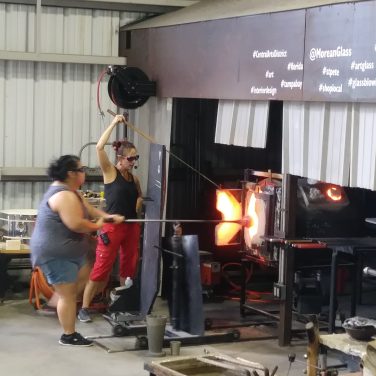 And, as usual- I shall leave you with a quick lunch recommendation.  The Chihuly Collection is in downtown St Pete, which is a super fun area with lots of shops and restaurants.  My favorite is Lure, which is nearly across the street from the museum.  Great food in a fun and chill environment.  Tapas, sushi, and excellent drink specials make it a great lunch stop!

And my goodness, it was delicious.

Additionally, if you are in St. Petersburg and interested in art, there is the sublime Dali Museum just down the road.  Definitely worth a stop, for not only the phenomenal art, but also for the beautiful architecture.