So, I’ve spent the last little while back in Florida.  It’s been hot.  And a bit hurricane-y.  But recently, I got to go to a Lego art exhibit, The Art of the Brick, in Tampa that was really fun, and kind of inspiring. 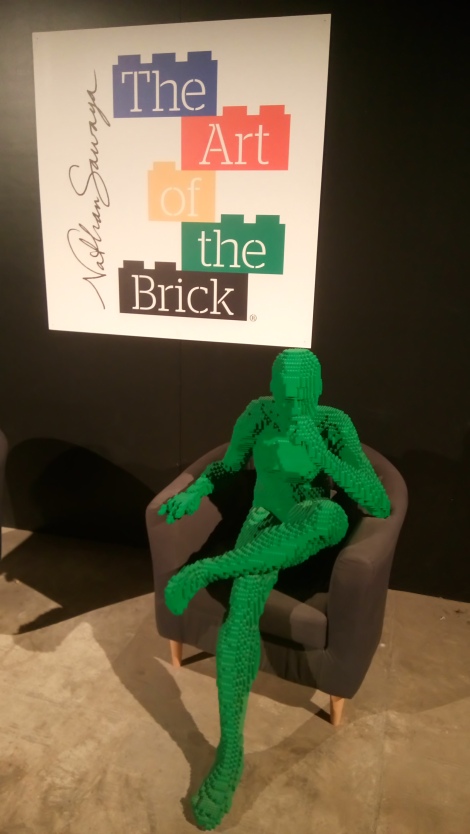 Now, if you’re a big fan of Lego… and live in the Florida area, maybe you’re thinking… “A Lego Exhibit? Surely she would just go to Legoland.” But no.  That’s untrue.  Mostly because the idea of walking around a theme park full of people and screaming children when it’s 100F/38C and the sun is just… glaring- that’s just not my thing.  A Lego exhibit in an art gallery- more my style.

Bonus fun fact, Legoland is $80 per person, and the Lego exhibit was free.  I’m nothing if not thrifty.

The Lego exhibit was free because it was sponsored by the Vinik Family Foundation. I know very little about the Vinik’s or their organization, but they support education, arts, and human services.  So, that’s all good in my book.  And this exhibit was wonderfully fun for kids, and I was happy to see that it was free- meaning all kids can go.

However… because all kids could go- it was often very crowded.  Because I am a procrastinator, I ended up going on the Friday of the last weekend of the exhibit.  At first, I showed up and the line was out the door, down the block, across the side street, and down that block.  And there were tons of school groups in the line.  It made me happy, to see so many kids so excited, but it also made me consider going a bit later… so I did my other favorite thing- found food!

I don’t have any photos of the food- because I basically inhaled it all as soon as it got set on the table.  If you’re in downtown Tampa, check out Urban Cantina.  The tacos were delicious.  They have a ton of kinds, and you can mix and match.  I decided on a pork sampler- Carnitas, Al Pastor, and Chuleta.  All three were fantastic.  And the salsa given with the free chips and salsa was super fresh and just perfect for my taste.  The service was very attentive and fast as well.  An odd choice of music- soft rock from the early 2000’s… didn’t really match the flavor of the place.  But overall it was excellent.

So, after a quick meal, I returned to the gallery to find the line a bit shorter, but was really surprised at how fast it moved.  We were quickly ushered in, and watched an only kind of interesting film clip about the artist that created all the Lego sculptures, Nathan Sawaya.  And then let loose on hundreds of sculptures and pieces of art.

The first area was where he recreated famous works of art with Lego bricks. 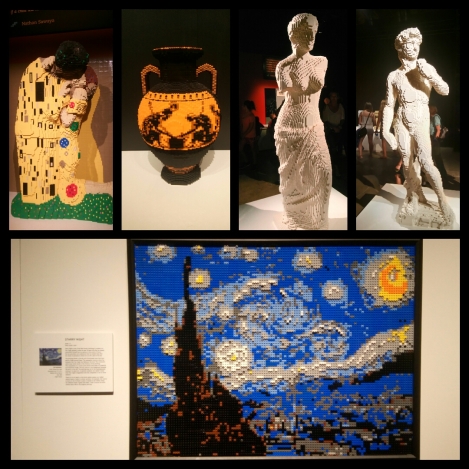 There were so many cool things to see- 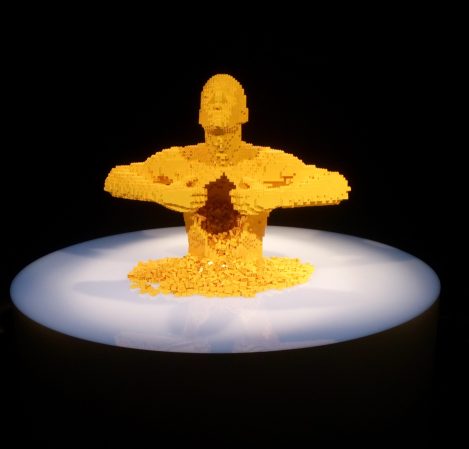 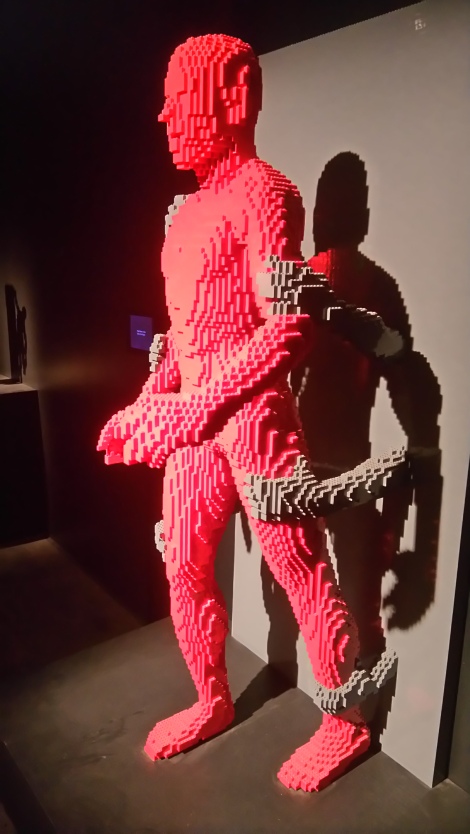 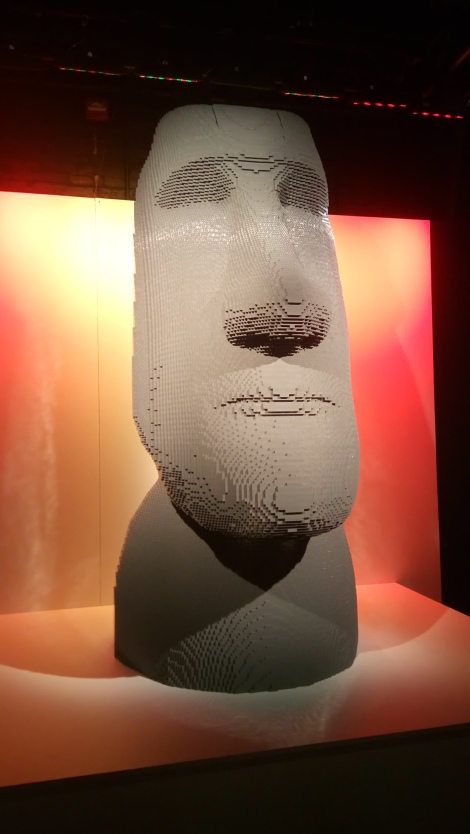 The size of all the sculptures is really hard to capture, but they’re big!  Especially large was the full size dinosaur! 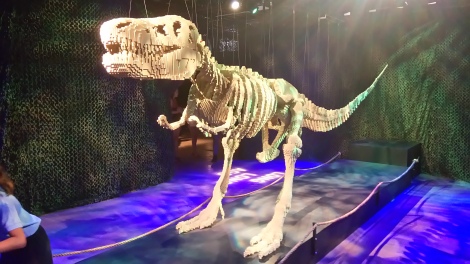 Some of the sculptures looked very different from different angles. 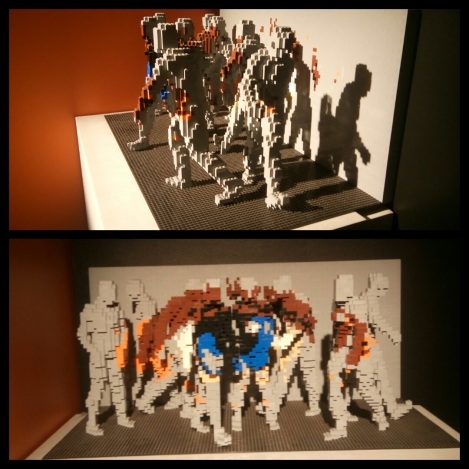 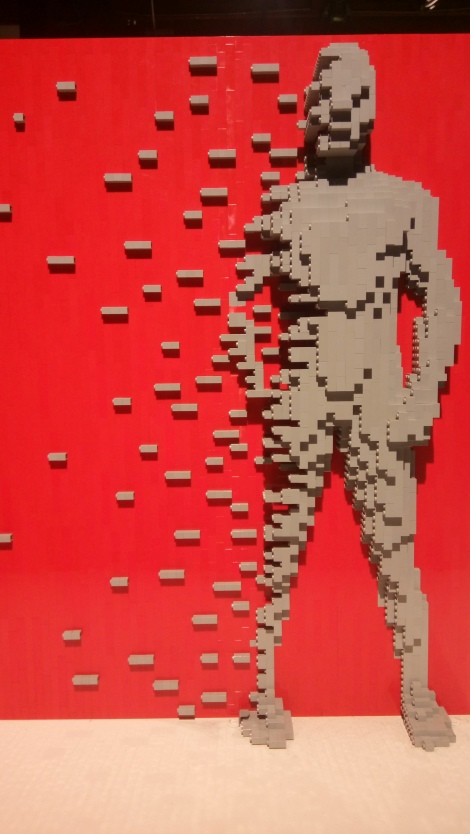 The idea of the patience it must take to create even one of these giant statues is mind boggling.  I’m not known for my patience. 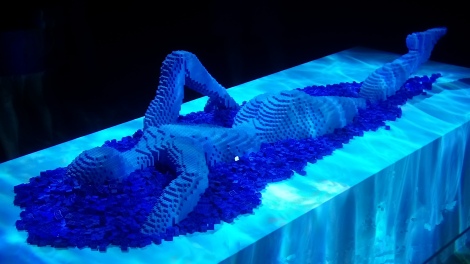 There was another interesting part of the exhibit where Lego sculptures were incorporated into more traditional art, and the presented side by side. 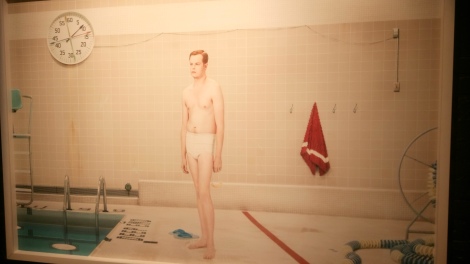 It looked like a normal picture until you looked closely and realized the towel and flip flops were made of Lego bricks! 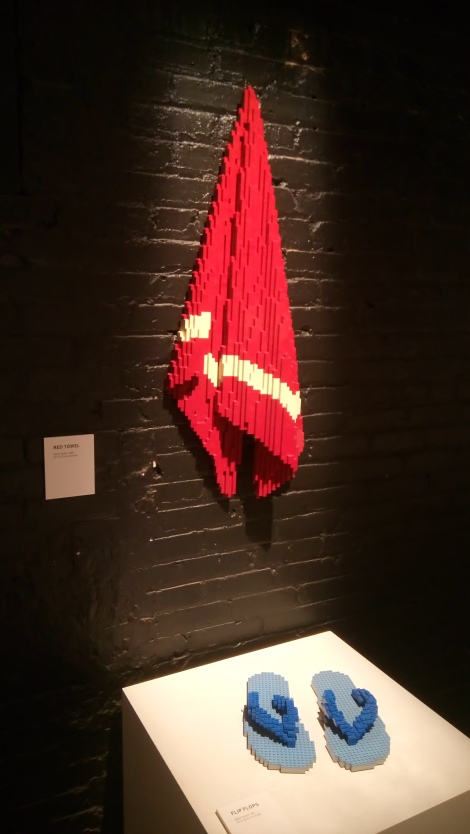 The end of the exhibit had a big room where kids could make their own sculptures with tons of bricks provided by the exhibition.  They all looked to be having a lot of fun.  Because I didn’t want to be outclasses artistically by a six year old, I did not make my own Lego sculpture.  But it definitely looked like all the kids were having fun!

If you happen to be in a place that the Art of the Brick exhibit is travelling to (St. Petersburg, Russia; Seoul, S Korea; Pittsburgh, USA)- don’t hesitate to check it out!  You can find more info about the artist- and upcoming exhibitions here: www.brickartist.com 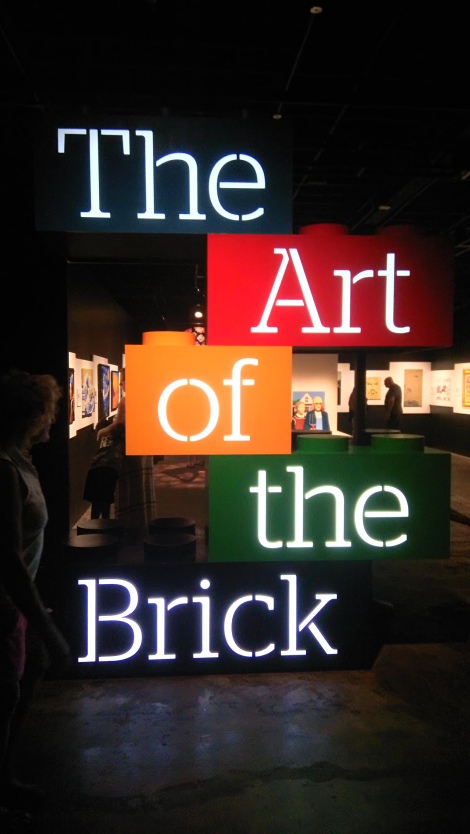