In all the times I’ve played games at fairs and carnivals, I’ve never really been a big winner.  I’ve never hit the plush toy jackpot, you could say.  I’ve won a fair few small toys, as most of the games are based primarily on aim… and I have good eyesight… but pretty poor aim.  So I usually end up pretty normal, I guess.

I went to the Strawberry Festival in Plant City, Florida.  There were many many games to play, and most of them were full of the same few plush toys: 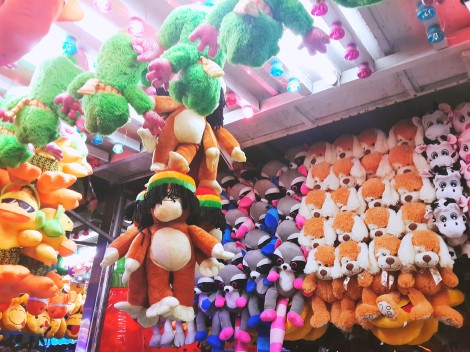 I would have been thrilled to win any of these toys.  And I started keeping an eye out for any particularly good ones.  Or games where ‘everyone’s a winner!’ because those are usually the only ones I win.

I didn’t even really consider this one- because the toys were all so big that I figured I had no shot.  They just seemed like you would need superhuman talent to win…

But, while waiting for my group to go on the Ferris wheel, (not my favorite thing) I started actually watching the guy play this game.  All you had to do was use a stick with a string and a small hoop on the end to stand up a glass bottle.  And he kept doing it.  And showing everyone how to do it.  And I realized there was no luck involved in this.  And no aim.  It was just a test of your brain- and whether you could follow the instructions even as they went against your instincts.

BRAIN GAME! I was winning that Plush Penguin.  I continued to watch until everyone was off the Ferris wheel- and then I went for it.

After I stood up the bottle, the guy told me I could put my stick down.  I told him that I had never won anything before and he was crazy if he thought I was just going to win this without taking a picture.  I proceeded to hold the stick for several minutes as we tried to get the picture. And then I got to pick out my Penguin!

And then I proceeded to take selfies with the Penguin all over the festival grounds to the chagrin of every child there.

Then Penguin and I went to get some Cotton Candy!

And then! We headed to the concert ground, where Lonestar were performing. 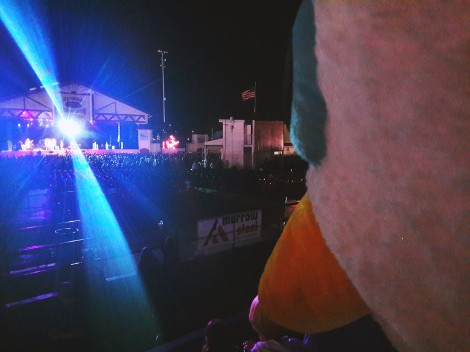 Penguin took up two seats, but it was oddly satisfying to be listening to ‘Amazed’ while sitting next to a giant penguin.

Finally, it was time to go home, but we had a bit of a problem fitting Penguin into the car. 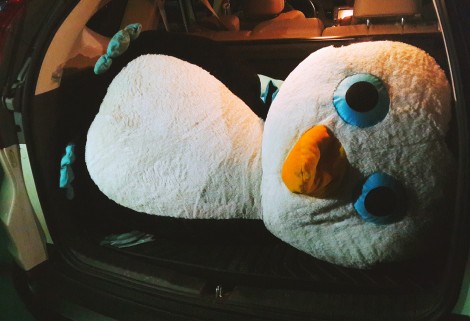 But finally, we made it home where Penguin chilled on the couch, until I could find a decent home for him in a children’s hospital. 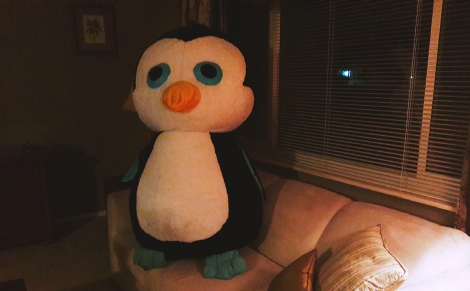 Turns out, hospitals have kind of strict rules about toy donation- probably because of the germs.  So we decided to donate Penguin to a second hand shop associated with the children’s hospital.

But not before Penguin watched longingly out the window. 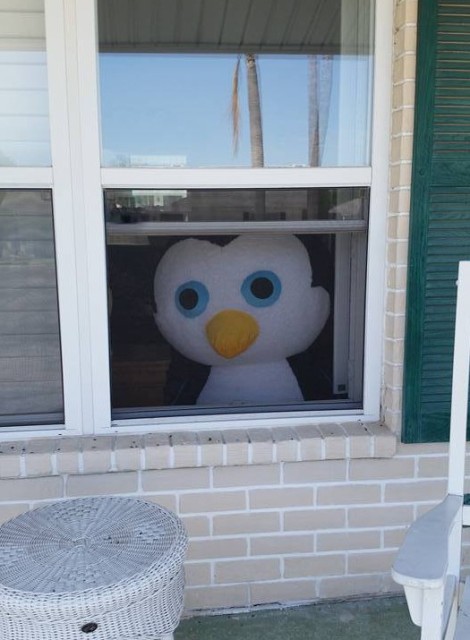 So, that’s the penguin story.  It’s not a big deal to most… but definitely one of the most exciting things to happen to me since I’ve been home!