Recently, at school, we got to the place in the calendar that everyone had been looking forward to for months.  Winter Break.  Not to be confused with the Christmas holiday break, winter break is thrown in the middle of February because, you know what?  There’s a long time between Christmas and Easter.  And a two week holiday is just what every teacher (and student) needs.

I had grand plans for the holiday.  5 countries, meetups with 5 friends from three very different times in my life.  One new continent. Allllll the food.  Sunshine. It was grand.  And then reality had a little discussion with my ambition.

5 countries in 11 days isn’t even fun.  What’s the point in going to countries you’ve never been to before if you’re only going to be there for a day or two? Have you seen your bank account?

So I had to trim the trip back a bit. I decided to visit Belgium, and the Netherlands.  Tickets were surprisingly cheap from Poland, and the countries themselves were small enough that travel in and around would be quick and easy. (Didn’t turn out that way, to be honest.) Add to that the fact that I Love the Netherlands and that one of my favorite hostels in the world is just outside Amsterdam- this seemed like a no-brainer.  Well.  Lucky Lake isn’t open until the summer so I needed a different place to stay.

While in Amsterdam, I was excited to see a friend of mine, who suggested staying at the Train Lodge.  I took the advice, even though I was a bit wary.  I’ve taken a lot of night trains and I’ve never had a particularly restful sleep.  And the toilets always left something to be desired.  (mostly space)

To say I was pleasantly surprised would be a gross understatement.  Finding the hostel is a bit wonky.  It’s literally right outside the train station.  But, so are a lot of trains, so it kind of blends in.  However, it’s pretty much the only one that is painted bright colors.  So I followed the rainbow highway to the train.

Now, I knew I was staying in a train.  I knew it would be train-like.  But for some reason it was really shocking to me that it wasn’t train like- it just was a train.  With train doors, and train snack car, and train windows.  I was very excited for what I thought would be a really cool stay in spite of the obvious downfalls of sleeping in a train.

I was happy to learn that I had three dorm mates in our 6 bed dorm.  But dismayed when I found out the two upstairs sleepers were going out at 10pm, and the other girl was going to be leaving for the airport at 5am.  I’ve always been a light sleeper, so I figured I wouldn’t be getting any sleep this first night, but whatevs.  Hostel life. 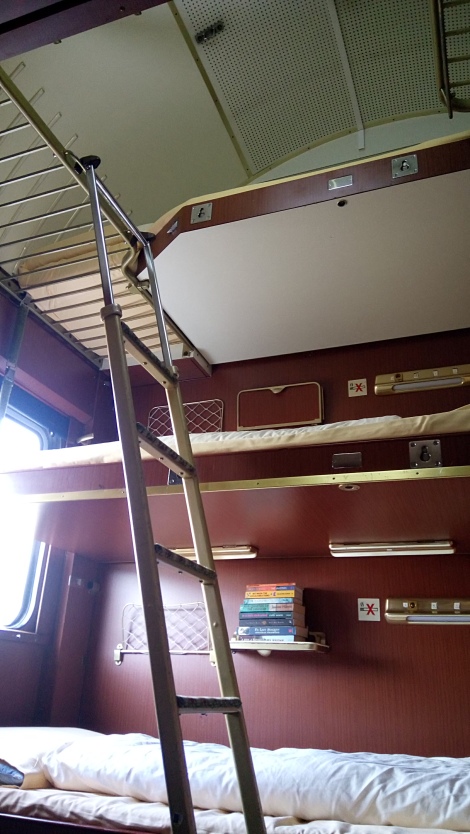 It was one of the best sleeps of my life.  I didn’t wake up all night.  I slept through the drunk girls coming home.  I slept through early flight getting up for the airport.  In fact, when I woke up (before my alarm, and well rested) I didn’t even feel the need to go out for coffee (which I did anyway.)

The other reservations I had prior to check in were the toilets and showers.  This became a non issue as soon as I actually saw them.  Both were roomy and clean and because the showers and toilets were separate, and the rooms had sinks in them, there was never a line.

All in all it was a lovely stay.  Something new, something different.  As someone that dreams of building a tiny house in an old bus/train car it was basically a dream come true.  A very enjoyable weekend, filled with good people, good food, and great sleeps.

I had one of the best sandwiches of my life while in Amsterdam.  I was walking around (on my way to a used bookstore) and stumbled upon Ivy & Bros.  It’s a super cute little cafe, with a warm and welcoming staff.  And delicious sandwiches.  They have other food as well.

Loooook at it.  It was wonderful.  And very much a sandwich that was more than the sum of its parts.  You could tell they were really careful with the mix of flavors included.  Was lovely.  Highly suggest.