When people ask me why I decided to come to Chile there are two main reasons: (other than the fact that it’s shaped like linguini and I love pasta.)
1. The rescue of the Chilean miners in 2010 is, in my opinion, one of the greatest events to happen in my lifetime. Perhaps the greatest.
2. My love of the Arsenal football team, and in particular the spectacular play of Alexis Sanchez.
It is because of this love for Alexis that I ended up in his hometown, Tocopilla.Saying that Alexis loves Chile, and Tocopilla specifically is such an understatement. But I was very happy to find out that the people of Chile and especially Tocopilla love him right back. In fact, this made me cry.

Almost immediately on arriving to Tocopilla, I was annoyed. Because all we hear about Tocopilla is that it’s really poor, I bought a ticket for a night bus in and out of the city, leaving me with one full day (7am-7pm) to explore the city. Mostly I just wanted to see the murals of his face painted on buildings, and walk down the street that was named after him. (This sounds a bit like I’m a creepy stalker… but it wasn’t like that at all)
When I arrived, I found that it wasn’t a shanty town as it had been portrayed by most of the media. While it was wouldn’t win a ‘richest town in Chile’ award, it was still a funky little town with cute cafes and restaurants. I wish I had more time there, but I had already booked my ticket out.

First order of business was finding Alexis Sanchez street. Walking there, saw many murals, and also a kid wearing an Alexis jersey, swinging on a swing in a playground, that if I had to bet, Alexis had helped build.

Then, I got here:

Afterwards, I stopped and had lunch at a great cafe La Ideal.

I sat under a signed Alexis headshot… which I found adorable that he made a happy face in the A.

In addition, I had a cafe con helado, and I was a bit confused as to what I was ordering. All I knew for sure was that it was the best option if I wanted an iced coffee. (Note: I have got to improve my Spanish) However, this turned out to be the best kind of confusion, because I ended up with this beast:

Lunch over, I continued walking around, noticing in particular the street art around Tocopilla. It was everywhere. My favorite was the work of Ibar. I haven’t been able to find any information about the artist… so I’m unsure if he/she/they are from Tocopilla, or even Chile. But there were several pieces around town. This was my favorite:

There was also a huge mural that ran all around the stadium. I had to take several pictures of it, so just imagine them all connecting… (I don’t know how to stitch them together on my phone)

And here are some more random shots of Tocopilla: 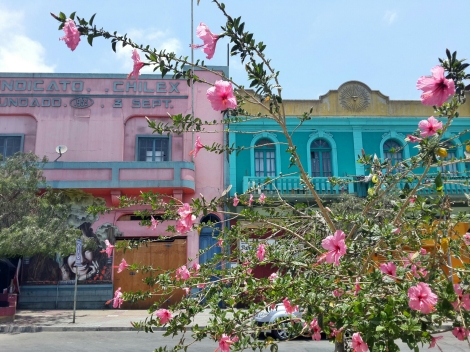 If you’re interested in another take, you can head over to http://blog.dancallister.com/2014/08/09/uraguay-chile-and-then-south-africa/ to see Dan Callister’s take on Tocopilla. Keeping in mind that he was paid to go there and write about it.