Just behind the snow factory we saw Suseong Land.  A small amusement park of sorts, it was also nearly empty.  Now, there was an entrance with a ticket booth, and just next to it a gap in the fence.  Through the gap we went.  Not sure if it actually costs money to enter for real.  Look for the gap in the fence.

This is not the fence you had to sneak through… but I really liked it.  Each post is painted to be a different person.  Some of them are famous cartoon characters, and some are just anonymous.  Now pretty quickly after entering Suseong Land, we saw what might be the strangest thing I’ve seen in awhile.  From a distance, we both said, “Wait.  What? Are those kids?”  Because it really did look like there were small children hooked up to carts, pulling other small children and their parents/grandparents around.

There were many characters, hello kitty, angry birds, a bear… and they were all dressed in outfits, complete with sneakers.  They shuffled around in a way that reminded me of E.T.  It was truly bizarre, but thankfully, they were not real children.  The mechanical characters were controlled by the handlebar, and one pedal.  Even after knowing they weren’t kids though, it felt weird.  Why did people want to ride in a cart that looked like it was being pulled by a child wearing a hello kitty head?  It just seems kind of perverse.

From strange to sad, after that “ride” we saw what might be the saddest little ride I’ve ever seen. (And this coming from someone that went to an abandoned soviet amusement park.) 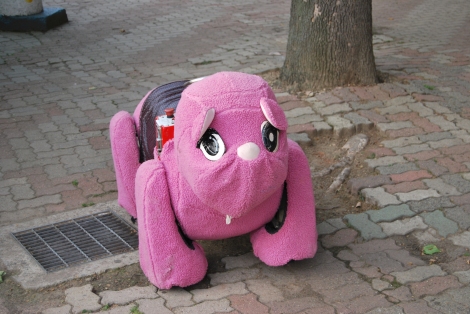 These characters could be ridden if you deposited about one dollar.  Someone, however, rode this one into a ditch and then left him there.  It didn’t look happy to be there.  Other characters were missing eyes or ears.  At least this one had all its pieces.  But at this point, I was thinking that nothing could be worse.  Except maybe a creepy clown.  Cue the creepy clown.

Nothing like going up and down with a clown.  But at least the clown had equally endearing (or creepy) friends:

On the upside, there were lots of actual rides, a viking ship, carousel, spinny-roundy thing… 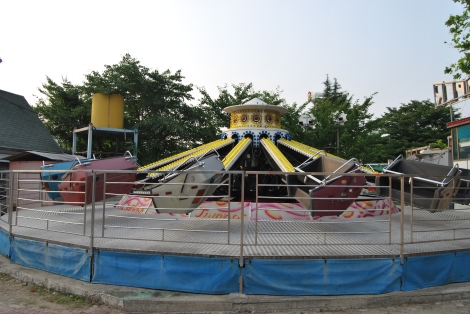 Does this ride have a name?  There were also several booths to win prizes at.  We chose to try out the balloon popping darts.  And after two tries and five dollars, I won this Rilakkuma plush!

Which I then used as a pillow on the train ride home, and it was glorious. All in all, I really enjoyed the amusement park.  It was amusing.  I think for a kid, it would be great.  Everything was painted really bright colors.  There were lots of things to do.  Lots of places to take photos. Even as (basically) adults we ended up spending more time there than we had planned.  We used up all the duck boat time… and were even a bit late to dinner.  So definitely worth it.