Last weekend, I wanted to go on a day trip.  On a budget.  And what does that mean?  That means take the subway to the last stop, and see what’s there.  I did this last time I lived in Korea as well, but the subway line has been extended considerably since then.  To give you an idea of how far- here’s a handy map!

So, still riding the Seoul subway, it’s pretty far!  What a deal to be able to travel that far for less than $2.  Korea has figured out this whole public transportation thing.

Now, because it was a day trip, I planned on getting up early, and biking to the train station, and then spending the whole day exploring Asan.  However.  Because it was the weekend, I ended up sleeping in and then deciding just to walk to the station.  This ended up being to my benefit, because I met a friend along the way, and ended up having an exploring buddy.  Always nice.

The train ride to Asan took about an hour.  The best part of it was the fact that we had seats on the train the entire way.  Not standing for the entire hour?  The day was already a win, and we hadn’t even gotten there.

Now, in true me fashion, my planning for this trip was… lacking.  I briefly went on TripAdvisor, and looked at the major sites, and decided what I really wanted to go see was Hyeonchungsa.  It is a shrine in the north part of Asan, and from the pictures and comments, a beautiful place to relax.  So, that made up my mind, and i didn’t really see exactly where it was located.  Turns out, the shrine is about 6 or 7 Km from the nearest subway station.  But it was a beautiful day, so we decided to have a nice walk.  The first part of the walk was not too exciting.  Mostly through the city, it was pretty much like most other Korean small cities.  Though we did notice an abundance of bowling alleys, and that all of the sports fields and equipment were spectacularly well kept.

Our path to the shrine took us to a lovely bridge over the river.

The river here, like most rivers in Korea, had walking and biking paths along both sides.  But unlike in my city, this river was actually quite picturesque.

Running along the river, there was a pedestrian street that was really beautiful.  I can only imagine how gorgeous it would be in the fall.

After walking along this pedestrian street for awhile we came to a building with some really cool artwork on it. 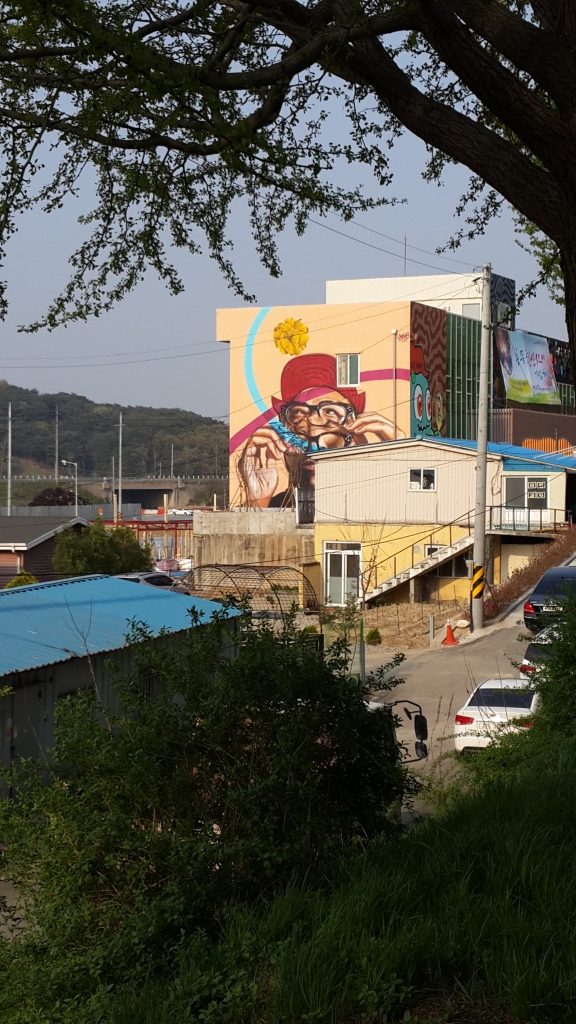 Even better news (for me) was that in front of this building there was a street busking festival.  So we stayed for a bit, and watched the band.

Now, we didn’t stay long… because the late start, plus the hour train ride, plus the 5 km walk, meant it was already almost 4pm. Add to that, the fact that we were still at least a kilometer or two away from shrine, and that most temples close around 5pm, we had to get moving.  We finally arrived to the intersection outside the shrine and I was a bit dismayed to see the unending line of cars waiting at the light to leave the shrine, and NO cars going to it.  Fearing it was closed we walked up the long entrance way, and were happy to see that the gate was still open!

In we went, and almost immediately, it was so unbelievably peaceful.  We walked around the grounds for awhile, and I was actually happy that we had gotten there late.  Most people had already left, so it was not crowded at all, but there were still some people around, so we felt like it was ok to still be there.

There was a large pond, surrounded by different colored trees and flowers, making it really beautiful.  The pond was also filled with Koi fish, some of which were MASSIVE.  One interesting thing that I had not seen before, was the machine with fish food for sale.  50cents bought you a small cup of fish food pellets.  When you tossed them into the water, the fish freaked.

By the time we got to the furthest part of the grounds, there was an announcement over the intercom that we didn’t understand.  Because everyone else started turning around, we assumed it was a temple closing announcement.  Unfortunately, we hadn’t yet seen the actual shrine.  So we quickly located a temple grounds map, and ran over to the main shrine.  (We didn’t run.  Too hot, too much walking… but we walked quickly)

When we got to the shrine, it was up a big hill, and the gate looked closed, and no one else was around, so we just took some pictures and headed home.

On the way back to the subway station, we decided to take the bus, which was a much better idea than walking.  And we should have done that on the way there.  But all in all, it was a great way to spend the afternoon.  Really beautiful.  The air was clean and it was great to get out into nature a little bit.