Yay!  It’s time for spring break!!  And the wonderful part of being a teacher?  Spring Break continues to apply long after you’ve stopped studying!  Spring break comes early in Korea, but we had a great time joining a trip down to Jeju Island off the south coast of Korea.  While we were down there, we also headed over to Udo, which is a very small island off the coast of Jeju.

Jeju is quite famous in Korea as a vacation destination, especially for honeymoons.  Because #sobeautiful.  Because it is quite famous, it is also usually very crowded.  I was happy that this year we had a 5 day weekend in the spring, so we could go down to the islands before the crowds arrived.  Yes, we were wearing winter coats on the beach… but we were on the beach!!

As fun as Jeju was, I really enjoyed Udo.  It was smaller, and less popular, but I liked the relaxed atmosphere.  We rented bikes and rode around the island for a few hours.  It was gorgeous:

When we got to the island, we were encouraged to try the burgers at a Marilyn Monroe themed restaurant near the beach.  When we got there, the was a table free outside, so we ended up sitting out there, and my goodness, when the burgers came we thought we may have died and gone to heaven.

Looked phenomenal.  Unfortunately, it was one of the ONLY disappointing things about the trip.  The burger patty was the only thing on the whole burger that was warm, and I’m pretty sure it might have been microwaved.  It wasn’t even warm enough to melt the cheese slices… So basically it was a so so burger and a side salad stacked on a bun.  Which is cool.  But it looked like it was going to be epic.  And they didn’t have fries.  A burger just isn’t the same without fries.

Luckily for us, the rest of the food we had on the island was spectacular.  No pictures, because I didn’t wait long enough to take pictures.  But Jeju and the surrounding islands are famous for their black pig barbeque.  In Udo, I had black pig kimbap, (which is sort similar to a sushi roll, but can be filled with a variety of meats and vegetables.) We also tried delicious orange makgeolli.  That- I loved. I’m not usually a huge fan of makgeolli (looks too much like milk) but the orange flavor was spectacular.  We had peanut as well, which was good, but I mostly stuck to the orange, because YUM. 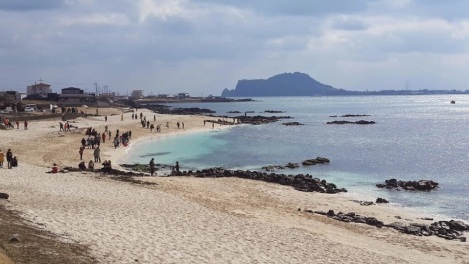 The beaches were gorgeous, and relatively empty.  I imagine in the summer, it would be much more busy.  Not only were the beaches calm, the roads were as well, which was lucky for us bikers.  There were very few cars to share the road with.  This was good, because the roads could be very narrow, and twisty, and ocean-side.

So there’s a little glimpse of Udo.  If you’re reading this because you’re planning on taking a trip down there, be sure to rent a bike, or scooter.  I believe the bike was 10,000 won for 3 hours.  Well worth it to see the island.

Soon, I’ll be posting about Jeju, and the odd obsessions there.  🙂