I spent three days in Kyoto while I was in Japan.  On one of those days I headed out to the Arashiyama District, which is on the northwest corner of the city.  There are many temples and shrines in this area.  There is also a monkey park, and a bamboo grove.

Now, I took the long way out to Arashiyama, and did a lot of sightseeing on the way.  I also chose the hottest day of my entire trip.  It was just about 40 degrees, with 95% humidity.  (104F)  So after a pretty full morning of walking around, I was pretty exhausted.  And found myself by a beautiful river, that really made it seem we were leaving the city.

Now, the trick here was that if you turn right, you can go to the monkeys, and if you turn left- bamboo here you come.  I was about dead enough that I really considered just getting back on the bus.  Seriously.  I’m a winter kid.  This heat and humidity combination wasn’t fun AT ALL.  But I decided not to go back.  “You only have three days in Kyoto!”  I told myself.  “You definitely won’t be coming all the way out here tomorrow, so make the most of it!”  I convinced myself.

I decided to go to the monkey park, because I had already been to a bamboo forest in Korea, and bamboo’s really cool… but after the first 1,000 sticks of identical looking bamboo… it kind of loses it’s charm.  Also, because monkeys.

I got to the gate of the monkey park at 4:55.  I didn’t realize the park closed at 5:30.  Last entrance was 5pm, so I had just made it.  The ticket person took the money, gave me the ticket, and explained that it was about a 25 minute walk to the actual monkeys.

How can you sell me the ticket, and then tell me it’s a 25 minute hike up a mountain?  How am I supposed to get up and back down in 35 minutes?!  I gave it the old college try.  Because it was so close to closing, there were almost no people on the trail, which was actually really peaceful.  Were it not for the horrific weather, it would have been really pleasant.  I walked and walked, and got to the point where I was expecting to see monkeys just around the next bend in the trail or so.  And then in the distance, I saw a big sign with a map of the trail.

Please note the ‘present location’ dot is as far away as you can get from the monkeys on this giant sign.  Definitely not what you want to see when you’re seriously considering just turning around.  Because really… how much do you like monkeys?  And why didn’t you take the nice lady’s suggestion and buy a bottle of water before heading up?

Onward!  (It’s a good idea to put the baby monkey picture next to the ‘stick it out!’ uplifting quote.  We’ll skip through this next part.  Just- walk walk grumble grumble walk walk.

And then finally- monkeys! 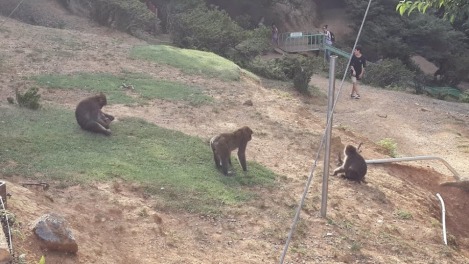 These baby monkeys were having a lot of fun fighting with each other.  And responsible adult monkey (I assume mom) looked on with almost complete indifference, it seemed.

This one just chilled on the roof.  Watched everyone.  I read a book by Dean Koontz when I was quite young.  Perhaps too young to read such a book… but it involved genetically altered Rhesus monkeys attacking a town.  And I know one thing has nothing to do with the other, but this monkey just watching everything started to freak me out.

The little guy on the other hand was pretty funny.  He (she??) was leaning over the edge of the pond, trying to get a drink and accidentally fell in.  Let me tell you he was NOT happy.

So, I felt a little disappointed in the monkeys.  They were interesting, but after climbing all the way up there, I don’t know… maybe I just thought I liked monkeys more than I actually do, because yeah, turns out- not such a big fan.  Pretty awesome view of Kyoto though:

Final verdict:  probably worth going to, but go earlier.  Right before closing time was not ideal.  Perhaps don’t go on the hottest day of your life.  And for the love of God, bring water.