Megabus has come to America.  I first took Megabus while I was in the UK.  What a cheap and easy way to get around.  The crowning achievement of my European travel was the 4pound but ticket from London to Amsterdam.  But now, Megabus has given me cheap travel options to get around the US while I am here visiting friends and family.  Truthfully, Megabus has been around for awhile.  But it has greatly expanded since last time I was in the states.  And now I have a way to get from Chicago, IL to Orlando, FL for less than $40.  And I got to stop in Nashville.

I try to go to at least one new city each time I am back in the states.  Last trip back I went to Seattle for the first time.  This time, I went to Nashville.  Nashville is a place that I had always been interested in, even though I don’t have a deep love of country music.  Or, really, any love of country music.  I’ve always thought it seemed like a cool place to be.  I like music, and thought I would like the city, even if it wasn’t my style.  So.  I went anyway, excited to experience something new at the very least.  And of all the things I saw, I have to say, I fell in love with Savannah’s Candy Kitchen.  It is a fat kid’s dream.

The sign outside pulls you in.  What are these delicious things?  And does ‘try’ mean free samples…  because it sounds like there could be some free samples.  In I went.

As soon as you walk in, you’re overwhelmed with the array of candy that is available.  You see the workshop/kitchen area, where they’re actually making it all, and then case after case of more sugar than can be safely consumed by a busload of teenagers.  White chocolate, dark chocolate, milk chocolate, various kinds of bark… 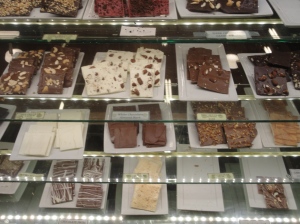 There were turtle-y things, and pralines, and caramel nut clusters, and a peanut butter cup bigger than I had ever seen before in my life.  They had an ice cream counter, and retro candies.  There was a wall of scoop-your-own-mix candies.  It was a candy explosion, but the reason it became such a highlight for me was the quality.  They made things there, they were fresh and delicious, and the people that worked there were nice to boot. 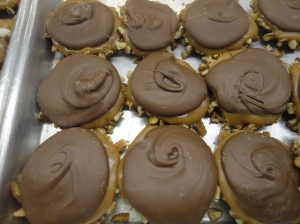 I ended up deciding to try a praline.  Mostly because I realized that I had never had a praline outside of pecan praline ice cream.  I don’t think I had ever even seen just a plain praline before.  I definitely had no idea what it was made out of.  Sugar and some type of nut?  That was my guess.  And that sounded delicious.  So, I bought one to try.

It didn’t look like the most appetizing of all the things in there.  But my goodness it was yummy.  And really sweet.  It seriously took me two days to eat it.  So if you’re traveling in Georgia, or Nashville TN, and you see a Savannah’s candy kitchen… stop in and have a look.  (p.s.  yes!  there are free samples!)