By now, you’ve probably realized I like castles.  So, you’ll understand that I was pretty excited to learn that there were castle ruins, on a mountain just on the edge of the town I’m living in, Pogradec, Albania.  I set off, thinking that I would walk up, then spend a little while walking around the castle ruins, and maybe try and stay till sunset, to watch the sun set over the lake.  Beautiful.

I started out with a short walk around the lake, and then was happy to see signs pointing the way.  Directionally challenged me was relieved.

Going in the right direction!

Now, it didn’t take long for the trip to get a little weird.  Definitely still in Albania!  First, there were a lot of chickens running around in the road.  No problem, I’m fine with chickens… (they’re smaller than seagulls)

But chickens aren’t all that strange to see.  (Even though there were a lot of them)  but like stray cats and dogs, chickens aren’t really a surprise to see.  A stray horse, however, was a little less common.  Eating lunch out of a dumpster… Two days later I saw the horse down by the lake snacking on delicious green grass (which is a lot better than the packet of crisps it was trying to eat when I took this photo)  Heh.  I said packet of crisps.

So, already this trip was more than I had expected, and I wasn’t even barely on the mountain yet.  Just to mention some other interesting things that happened as I walked up: praying mantis, big flying bugs, wild blackberries… general lack of flowers.
The mountain (which most people would probably call a large hill, but I’ve spent most of the last 6 years in Chicago and Estonia… anything that isn’t flat, is pretty much a mountain in my book) isn’t so large, but the path sort of winds around it, making the journey much longer than it seems like it should be.  But finally I was approaching the summit, excited to finally see Pogradec Castle!

You could say I was disappointed in the castle ruins.  Or, as I like to call it now, the dents in the ground where a castle should have been.

I took a photo of this rock, because maybe at one point is was a part of a castle.  Maybe.

But on the upside, yes I trekked up to see a castle that turned out to be non existent… but the view!  So wonderful!  On the one side, you had mountains:

On the other side, you could see the whole city of Pogradec:

You had great views of the absolutely stunning lake:

And you can even see the towns and villages dotted around the lake: 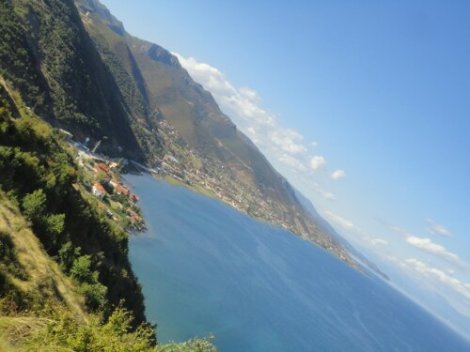 So, yes, the castle was a disappointment.  But the trip was worth it none the less.  Perhaps some new signs advertising the spot as a viewing point would be more applicable.

And one last picture of the gas station on the edge of town: 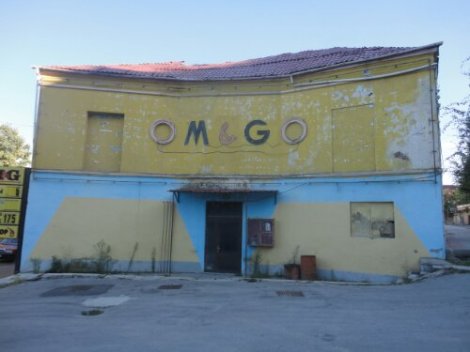 I really do love this place.