For a long time I have known that Croatia would be a highlight of my trip.  I had never been there… I’d never even really done any kind of substantial research on it, I just knew.  Leaving Tallinn, it was one of the places I was most excited to see.
When I finally got to Croatia, I went to Zagreb first.  I had a good time in Zagreb, but it just kind of felt like there was nothing to do.  I’m sure there were things to do… but it just didn’t feel like it.  Now, that being said there were plenty of lovely things in Zagreb, and a great little coffee shop that I spent every morning at, so it wasn’t that I didn’t enjoy it… it just wasn’t what I thought it would be.  I did, however, find one small shop that I absolutely adored.  A spice shop in the middle of the city that was just so interesting looking that I had to go inside, and oh dear god, the smell.  It smelled so amazing.  The woman that worked there was really nice and I chatted with her for awhile, even after telling her I had no house, no kitchen, and no reason to buy any spices.

After a few days in Zagreb, I went to Split.  I knew that I would only be spending an afternoon in Split because it was SO EXPENSIVE.  There was a music festival in town, and hostel prices were ridiculous.  About fifty euros a night for a dorm room.  I did the math, and on my twenty euro a day budget… that wasn’t going to work out.  But I did want to see it.  So I spent the day walking around, but it was HOT.  The air just… didn’t move.  Even the stray cats didn’t want to move…

It was pretty though.  The city is built within the ruins of a Roman palace.  It was very very cool.  Well, neat.  Not cool.  It was very hot. 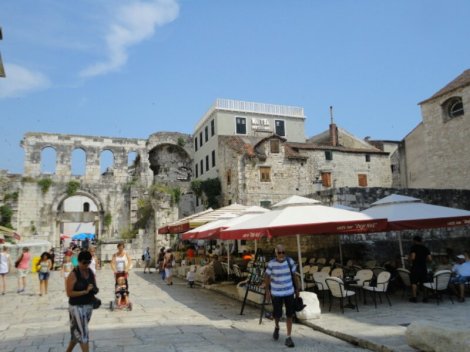 Ultimately, I found a hostel that was not too expensive on the island of Korcula.  Not only was Dragan’s Den reasonably priced, but it also had a pool, free bike rental, and a whole bunch of other perks that made me pretty excited to go.  Now, in general, I had never paid much attention to the Croatian Islands.  My infatuation with Croatia had been solely focused on the mainland.  So I wasn’t really sure what I would find.  But I figured, if Croatia is this pretty, doesn’t an island have to just be more pretty?  Isn’t that how life works?  Off I went.
I arrived in Korcula town, and made my way to the travel agency that would take me to my hostel, which was outside of the town.  I was pretty exhausted.  I had taken an overnight bus from Zagreb to Split, and had not slept at all.  The bus got into Split at 4:30 in the morning… and then I spent the whole day walking around, trying to make the most of the time  had in Split until my 5:00 ferry. By the time I got to he hostel, it was about 9:30, and I was tuckered out.  I didn’t even really pay much attention to the city, except to notice the lovely breeze that kept the temperature down.
The next day, I went with a group of people from the hostel and we rented scooters and drove off to see some of the more out of the way places on the island.  It was so much fun.  Our first stop was at the main beach in the town next to Korcula, Lumbarda.  The beach here is nice, and the water is so clear.

After swimming and laying, swimming some more and eating, we hopped back on the scooters and headed to a small cove on the other side of a peninsula on the island.  There was a light house there, and the beach was really nice as well.  The upside for me was that there were really no people there. 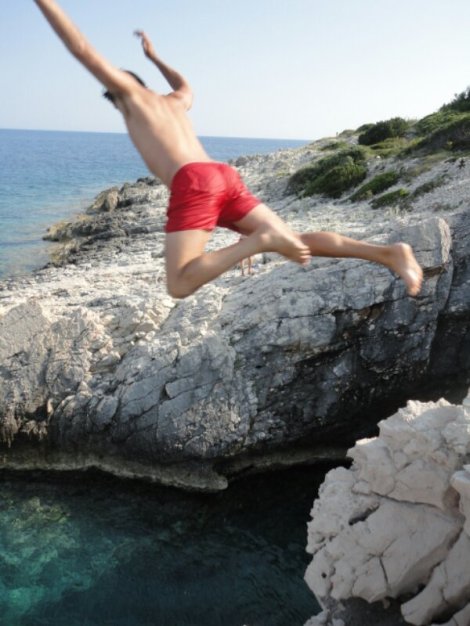 Some of the guys jumped off the very top of the rocks, which is pretty far!  I did not.  I jumped from the bottom of the rocks, which was still good and fun, just less likely to die.  And that’s how I like my fun.  Good times during which I probably won’t die.  But it was a really fun afternoon of jumping.  And I just kept saying over and over again, “I didn’t know water was so blue.”  Because really, I had never seen water that blue before.  I mean, it was BLUE.

Another wonderful thing about Korcula, is that it is one of the biggest wine producing regions in Croatia.  There were vineyards everywhere.  Just driving to the beach you drove past endless grape fields.  Wine tastings were very popular, and among the backpacking crowd, the places where you could go to the vineyard with an empty water bottle and get it filled with wine for unbelievably low prices, were really popular.

Seriously, everything about Korcula was just lovely.  Even the town was great.  It had been designed in such a way that the streets on one side of the city were straight, so the summer breezes would blow through the city and help keep it cool.  While the streets on the other side were curved, to keep the colder winter winds out of the city.

This was a blessing and a curse.  It was great to be cool, and the sea breeze was just divine, however- when wearing a summer skirt, sea breeze is not always your best friend.  After one Marilyn Monroe moment, where I was then waved at by a group of guys eating dinner… I decided to alter the flirty summer skirt, and behold, the not so flirty or fashionable, but still fun- skirt knot.

As this entry comes to a close, I feel I should end it how most of my nights ended…  watching the sunset.  The sunsets in Korcula were just breath taking.  But it was shocking how quickly the sun actually set.  It would take all day for the sun to get close to setting, and then there were very few moments of beautiful sunset before it darted below the horizon.  Darted.  Really.  It was fast.

And with the sunset, eventually came the stars.  Most of you know that I am kind of a science nerd, especially for all things space.  And I have been spending a lot of my time for the past… 10 years or so living in or nearby large cities.  So, I was very excited to see a night sky full of stars.  I could even make out the hazy band of the Milkyway.  I could see the galaxy.  Unfortunately, my camera could not.  Sorry.  It tried, but mostly, I’ve just got pictures of black.  But just picture it in your mind.