When planning on going to Slovakia, I wasn’t really thinking about castles.  It didn’t seem to me to be a place where castles would be a big attraction.

Just outside of Bratislava, lies the ruins of Devin Castle.  Perched on a hilltop, it overlooks the places where the Danube river meets the Morava.  Now, it is just ruins, but it was quite spectacular to see them. I met up with a guy in the hostel I was staying at and outward to Devin we went.  First, I must say, getting to Devin was much easier than I thought it would be.  A very easy bus trip from the city, you board the bus at its first stop, and get out at the last.  No worrying about missing your stop here.  Another cool thing, for me, was that the bus stop in town was covered in really cool street art.

When you arrive at Devin Castle, the bus drops you off at the bottom of the hill.  There are a few bars and cafes nearby, and upon seeing how high up the castle actually was, my friend and I looked at eachother, and I seriously contemplated just getting an ice cream and waiting for the next bus.  It’s high.

There it is… alllll the way up there.  But he’s a pretty active guy, and I didn’t want to be the lazy schmuck, so up we went.  It was a surprisingly easy walk up, and felt no where near as high as it looked.  Truthfully, the upper part of the castle was closed to the public so we didn’t get to go all the way to the top. It was closed due to renovations, and a lack of funding had suspended the renovations.  So they were only charging half price.  I think they should just continue charging full price, because then they might have enough money to finish the renovations!  Full price was only 3 euros.

The castle ruins were beautiful, but it was really the surrounding area that was the most stunning.  I just kept wandering aroj d saykng, ‘It’s so beautiful.  I know keep saying that, but everytime I think it,  take three steps, and think it all over again.  It’s so beautiful.’ 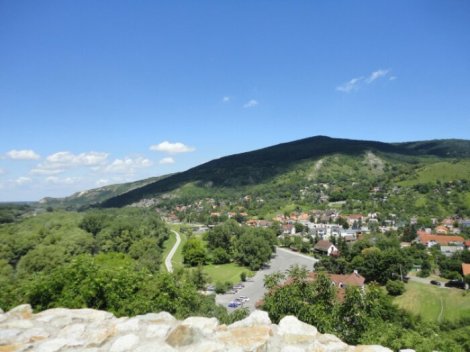 You could see the cloud shadows as the drifted over the hills.

The castle, as I said, is at the meeting point of the Danube and Morava rivers.  I loved how you could actually see the waters from the two different rivers meeting and mixing. 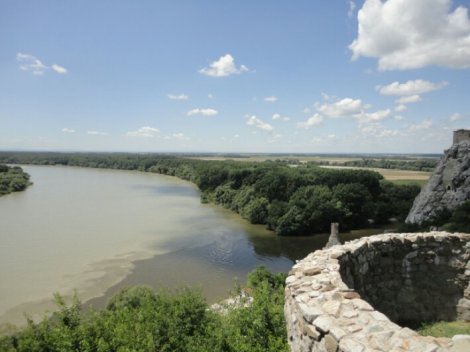 After spending a little too much time walking around the castle babbling about how pretty it was, we decided to walk down to the river and then through the little town as well.

It was such a beautifully clear day, you could see the trees reflection in the water.

The town near the castle was a mix of very expensive looking houses, and very old ones.  All in all, it was a cute town, with a great view in its backyard.  We saw this super cute puppy that really really wanted to be pet.

At the end of the afternoon, we indulged in the ice cream at the cafe, and waited for the bus to come back and pick us up to go back into town.  A really lovely day, for under 5 euros (including return bus ticket, castle ticket, and ice cream)

One response to “Devin Castle, Slovakia”