Just on the northwest corner of Tallinn is Patarei Prison.  Though used as a prison as recently as 2002, it is known for being one of the most well preserved Soviet prisons.  A few days ago, I went with one of my coworkers to visit the prison, rather unsure of what to expect.  There is surprisingly little information to be found about Patarei.  For example, there is no wikipedia page about the prison.  There is a website,    http://www.patarei.org/eng/  which has some basic pictures and facts, but not the wealth of information that you would think would accompany a complex with as much history as Patarei.  What we found was pretty grim.  It is a spooky creepy place that seems to be exactly the same as it was when the Soviets were ruling Estonia.

Walking up to the prison gives you a pretty clear idea of what you’re in for.  The prison itself is desolate; tall fences wrapped with razor wire surrounding land that seems to have been forgotten.  The building itself huge, imposing.  A general sense of unease fills you as you walk up to the front of the prison.  Where do we go?  Where’s the entrance?  Why does it feel so creepy?  An old Estonian lady steps out of a shed, collects our 2€ and talks us into buying a guide as well.  And then points to a doorway.

The first room we enter is a rather small dark room, with a hole in the floor and one small window set high in the wall.  Too high to see out of, but it let in a little light.  Unfortunately for us, it was a rather cloudy afternoon in the Baltic fall, so there was not much sunshine to shine through.  A quick look at the guide compounded the uneasy feeling in my stomach.  This was the execution room, where, prior to WWII, prisoners were hung.  The base of the hook was still visible in the ceiling above the hole. The hole itself was just a few square feet cut into the floor, haphazardly covered with planks of wood.

In just the few minutes it took us to walk into that room, I realized this prison was going to be unlike anything I had ever seen.  There were no plaques on the wall detailing what we were looking at.  No replica Soviet era props spread around the room to try and make it feel authentic.  It was, rather, just authentic.  The room was pretty bare, dirty, and not so much maintained as potentially forgotten about.  It was part soviet prison museum, part abandoned building.  An overwhelming feeling of ‘I shouldn’t be here’ hit me, and stayed with me for a good part of the time I was there. 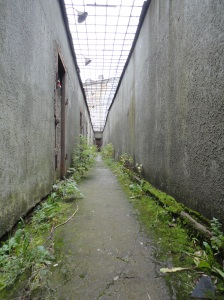 Walkway outside the walking yards

Upon leaving the hanging room, I found myself thinking that at least we had gotten that out of the way.  Now I could go look at other parts of the prison, assuming those would be a little less… grim.  Unfortunately, prison life at Patarei was not much better than that cold room.  Next up were the walking yards. Seemingly the recreation area would be the least oppressive of all the areas of the prison.  Not so in Patarei.  The walking yards were small courtyards surrounded by tall cement walls.  There were about a dozen of them, all in a row.  All open air tops, covered by bars and fencing.  A walkway along the top where a guard could monitor everyone.  It was one of the least recreational places I had ever seen.

From the guard walkway at the top of the walking yards

The view down into two of the walking yards

The cells in the prison were surprising.  First, I was surprised by how large they were.  These cells were at least twice the size of my most recent apartment.  Not so bad as cells go, I suppose.  Many of them were also sea view, as Patarei is directly on the shore of the Baltic sea.  (It was a sea fortress before it was a prison)  However, a quick check of the guide book changed my feeling about the cells.  Yes, they are large… but they also used to hold around 30 people each.  One cell still had the beds in it, and it was wall to wall beds with just a small walkway.  Also, one squatter toilet was in the corner of the cell.  One toilet- 30 people, and you can’t even leave the room.

One of the cells at the prison.

Next up past the cells was the operating room.  Medical instruments were still strewn throughout the room; test tubes in racks in the glass cabinet, operating table, and machines I had no idea what they would have been used for.  Made me really happy that I never needed to have surgery in a Soviet prison.  (And here’s to hoping I never will) 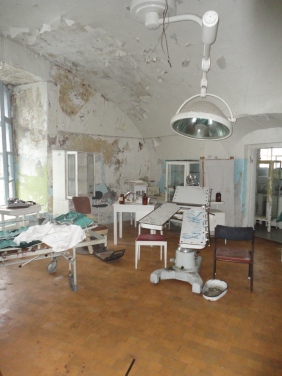 The medical instruments were a little intense, but overall the operating rooms and hospital rooms were by far the least creepy places in the whole prison.  By far.

Possibly some type of respirator?

Overall, I am really happy to have gone to the prison.  We had a good time exploring even though it was difficult just to be there.  I left desperately wanting to look at flowers while petting a bunny.  Here are a few more photos from around the prison-

A solitary shoe can be a mighty unsettling thing.

I desperately wanted to see flowers and happy things, but pretty things were few and far between at Patarei. Some flowers, though, persevere in even the bleakest conditions.